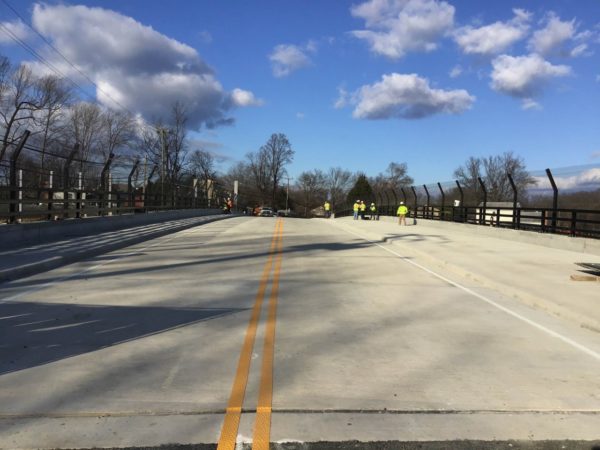 A reconstructed Cedar Lane Bridge over Interstate 66 in Vienna will reopen to traffic today as anticipated, the Virginia Department of Transportation confirmed yesterday (Tuesday).

Restoring Cedar Lane’s connection between Cottage Street to the north and Route 29 (Lee Highway) to the south, the new bridge is wider and features a sidewalk on its west side. A new shared-use path on the bridge’s east side will eventually link to a 66 Parallel Trail being developed from Dunn Loring to Centreville.

VDOT closed the bridge to both drivers and pedestrians on May 15 so that crews could demolish the existing structure and build the new one.

The bridge reconstruction is part of VDOT’s Transform 66 Outside the Beltway project, which is adding toll lanes along 22 miles of highway between Vienna and Gainesville.

The Cedar Lane Bridge reopening will enable Fairfax Connector to restore service on Routes 462 and 467 between the Dunn Loring-Merrifield Metro station and Tysons Corner to the routes and schedules they had before the bridge closed.

The Fairfax County Department of Transportation announced last week that it will also add Sunday service to Route 467.

Until the service changes take effect on Jan. 4, Fairfax Connector buses will continue following a modified route that utilizes Cottage Street and Gallows Road for those two routes.

Even with the new bridge completed, some construction activities will continue in the Cedar Lane area.

“Drivers, pedestrians, cyclists, and other bridge users should be alert for continued construction activity in the area surrounding the bridge, including completion of nearby sidewalks, noise walls, and the shared-use path along I-66,” VDOT said.