The results of a recent survey on whether to rename Thomas Jefferson Elementary School and George Mason High School triggered surprise, anger, and tears during a Falls Church City Public Schools School Board meeting on Tuesday (Nov. 17).

A majority of respondents — 56% overall — support keeping the names Thomas Jefferson and George Mason, two key historical figures from Virginia who publicly supported an end to slavery, while privately enslaving Black people. For George Mason, 26% support a name change, and for Thomas Jefferson, that population is 23%. The rest had no opinion.

K12 Insight, a consultant hired by the school board, surveyed parents, staff members, students in grades 6-12, and community members from Oct. 14 to 28 to gauge whether they want to see new names for the schools. For both schools, three-quarters of the community members who responded wanted to keep the names, and the margins were smaller for parents, students, and staff.

The discussion to rename the schools began on June 30. With the survey results back, school board members have scheduled a vote on whether to move forward with the name changes for Dec. 8.

Those who support changing the names cited the fact that the men participated in slavery and urged the school to embrace social change and support students who may feel marginalized. 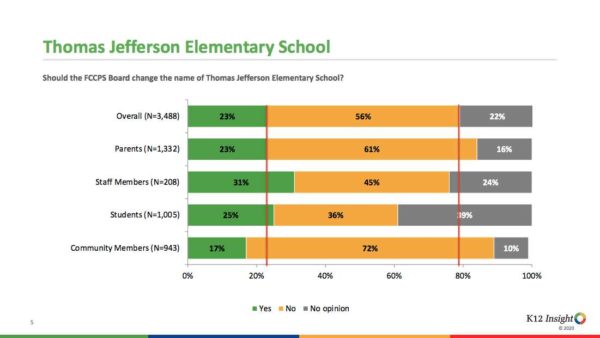 Those who voted to keep the names responded that slavery was a norm at the time that should not disqualify these men from being honored. 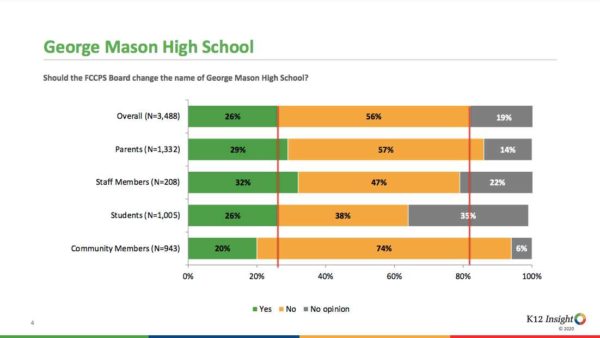 School Board member Lawrence Webb, the only Black person on the board, said during a work session on Tuesday that he was surprised by the results of the survey.

“There are a lot of folks who are progressive and supportive of community relations,” he said. “I’m sort of bothered by how folks have couched this conversation of ‘This is something that was acceptable at the time.'”

Webb disagreed with those who characterized a school name change as a waste of resources. The amount of money would be “nominal,” and for George Mason, the timing would coincide with an ongoing project to build a brand new high school.

In a speech, Snyder fought back tears as she recommended changing the name to support Black students and staff, teaching about Thomas Jefferson and George Mason, and diversifying school curricula.

“Thomas Jefferson and George Mason belong in our history books, their contributions and their thoughts both on full display, but we should not honor and elevate them in a setting where we perpetuate inequity by making it more difficult for some students to focus and learn,” she said. “We should not force minority students and staff to accept the judgement on renaming of a majority unacquainted with the personal toll of racism.”

“The results of the survey have an impact on our Black staff and how they feel they are perceived, and in my place as an old white guy, I can’t feel that, but I need to recognize it and I know that I heard it,” Anderson said.

The survey was sent to more than 5,000 people and had 2,545 respondents, 943 of whom identified as members of the community. Students registered the highest participation rate at 69%, followed by staff at 47% and parents at 39%.

The survey did not collect data on race, Anderson said in an email.

According to Falls Church City Public Schools: A History, a book published for the school system’s 50th anniversary, both schools received their current names in the 1950s.

Originally built by Fairfax County in the mid-1900s, Thomas Jefferson Elementary School got its name after being transferred to Falls Church City in 1956. The name was taken from the Jefferson Institute, which was founded in the late 1800s as the first public school in the area.

“Fighting injustice and racism starts at home,” wrote Hayley Loftur-Thun, who started the Thomas Jefferson petition. “We must change the way our city has treated and discussed racism. We must accept our mistakes and begin to build the city we claim to be.”