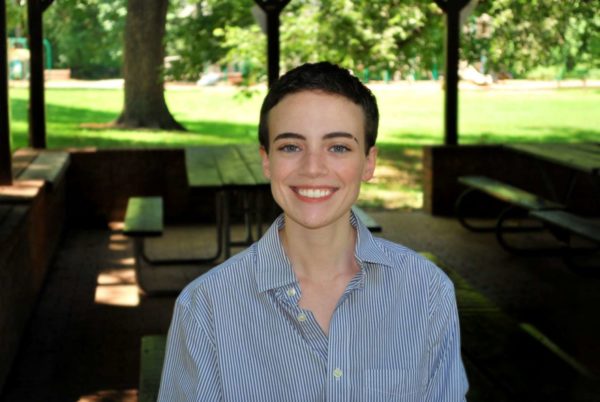 Editor’s Note — Tysons Reporter is running Q&As with the candidates running for the open Falls Church City Council seat. The stories have been condensed and edited for clarity.

Simone Pass Tucker is one of three candidates — along with Joshua Shokoor and Debora Schantz-Hiscott — running for the Falls Church City Council’s open seat in the upcoming Nov. 3 election. A 2016 graduate of George Mason High School, Tucker runs the candle shop Lavender Mensch Candles out of their home. If elected, they would become the first openly non-binary person to take office in Virginia history.

Tysons Reporter: Why did you decide to run for the Falls Church City Council?

Tucker: I have lived in Falls Church my whole life. I grew up being pretty involved in the local community and in politics. In 2008 and 2012, my parents took me door-to-door campaigning for Barack Obama, and I’ve dedicated my adult life to leadership, volunteering, and civic engagement. At North Carolina State University, and then William & Mary once I transferred, I became involved in progressive activism focused on things like reproductive justice, racial equity, the Israeli-Palestinian conflict, and climate change.

So, I have a history in activism and advocacy work. I came back to Falls Church City with a mission after college to make a Falls Church that is more eco-friendly, more compassionate, more equitable, more just, and more livable for everyone who lives here. I am a non-binary Jewish person, and so, I know what it is like to feel unrepresented by government, and I don’t want anyone else to have to feel that way, so I’m running to be a voice for our marginalized communities, to make sure that everyone’s voice is heard, and really, to bring a fresh perspective to our city council.

Tysons Reporter: For progressive issues like racial justice and environmental justice, why do you think those issues are important for the city to think about?

Tucker: In terms of racial equity, stated support of groups like Black Lives Matter is a great start. You know, Falls Church has a pretty racist past as a city, so we need to pledge to do better through concrete action and policy. In 1887, most of the black neighborhoods in Falls Church City were gerrymandered out, and we passed a local segregation ordinance in 1915 that wasn’t repealed until 1999, and we’re still largely divided actually along that same red line on Route 29.

To address these issues, as a member of city council, I’ll fight to establish dedicated city housing for people who work in Falls Church; purchase, preserve, and prolong the affordable housing units set to expire; fund housing vouchers; end restrictive, racist single-family homes zoning laws; establish public housing; [and] require the usage of body cameras for all police officers. As of right now, actually, we don’t even require our dash cameras to be operated at all times. I’ll bring unrepresented voices to the table by asking them directly what they need from local government. We don’t have a ton of citizen outreach like that at the moment, but it is extremely important to make sure everyone’s involved.

In terms of environmentalism, climate change is going to be costing billions of dollars and even more lives, so it’s really important nationally and internationally, but also at the local level, that we take action now before it’s too late. So, I am lucky enough to be endorsed by a few Virginia Sunrise Movement hubs — Sunrise McLean and Sunrise Williamsburg — and I am a passionate believer in the Green New Deal. The Green New Deal does have a national scope, but there are tons of ways to focus on enacting it at a local level. We focus on our carbon footprint, and we need to implement green energy in all of our government buildings and work towards requiring this in all incoming developments.

I also believe that…adding more green space, more permeable land is really important for Falls Church specifically, because we have a rapidly expanding floodplain, and our stormwater runoff issues are just steadily growing worse. I also think it’s important that we have proportional stormwater management fees and need to rethink how we’re approaching stormwater management. We don’t want to be having pipes that are just redirecting that stormwater. We want to make sure that we’re absorbing it so that it isn’t just causing a problem somewhere else. We don’t want to reroute the problem, we want to solve it.

Tysons Reporter: Why do you think having a younger person’s perspective on the council is important?

Tucker: Age is not really a prerequisite for success in politics, nor does it equate to making Falls Church a better place. I’m only 23, but none of us that are running have elected experience, and the other two candidates have had far more time to gain this experience than I have, and I think that my involvement at this point in my life is a reason to trust that I actually care…I’m spending my time getting involved in local issues, researching, drafting progressive policy, reading our zoning code in its entirety, and teaching myself campaign finance law. So, I’ve spent hundreds of hours on this, and I think that youth brings a certain optimism that others may not have, so I’m going to be more creative in my addressing of issues. I’m going to be able to contribute more time than the other candidates. I have a knowledge of things that matter in Falls Church, having grown up here, like the school system and how everything really works.

Tysons Reporter: If you were to highlight three agenda items that are especially important to you, what would they be?

a) Environmentalism: implement clean energy in all public buildings and require it in all new development; add green roofing and rain gardens; make progress on emissions reduction goals

Tysons Reporter: As a nonbinary person, what more do you think Falls Church City could do to support and include the LGBTQ community?

Tucker: Honestly, I feel very included in Falls Church City. The Falls Church News Press is great about using my correct pronouns, which are they/them, and I haven’t really dealt with many issues locally in terms of my identity, but I think it could be interesting to see maybe a statement from the city council about welcoming people of all identities and sexualities, and really, seeing more representation of people in the LGBTQIA+ community would be, I think, the next step. The first step in anything is the support, and I think that’s there, so we need to be thinking of ways we can take those next steps.

Tysons Reporter: What do you think of how the City of Falls Church has handled the COVID-19 pandemic? What more could the city be doing?

Tucker: The city council has made some great short-term zoning changes that have helped local businesses stay open and…allowed people to work from home. It would be great to see more support of local businesses. Again, they have done a pretty good job. There are grab-and-go banners that are up around Falls Church City letting people know that they can get takeout and that the businesses are still open. As I mentioned before, the small business liaison position, the one-person position with City Hall would be really helpful. As a small business owner myself, it’s really difficult to own a small business, and on top of that, it’s difficult to operate in a pandemic.

Our spending is down in Falls Church City, according to our MasterCard Inclusive Growth Score, and unemployment is at a record high of 4.6 percent, which is the highest it’s been since the 2008 recession. So, we need to be thinking of ways we can stimulate our local economy while accounting for public health and protecting the lives of our citizens. Internet sales have increased since the pandemic began, which is expected. It would be great to have some sort of digital marketplace or hub for local businesses, things like an online farmers’ market, to have an easy way to shop at all the local businesses in Falls Church. Personally, I think it would be great. I would definitely utilize that. We could put in a digital mentorship program to help set this up, maybe with some high school students and connecting them with older business owners or people who don’t have that technological knowledge, which would strengthen our community involvement more.

I think we need to be creative. This is a reality that none of us has ever experienced, so we need to be thinking outside the box with how we address it…I think I have that flexibility and that knowledge, and I’m ready to go in and try creative solutions.