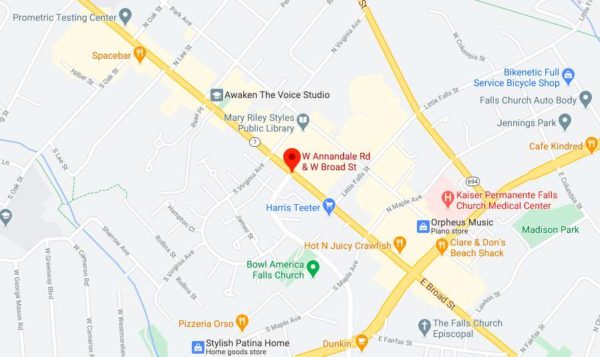 Falls Church police said that three people were sent to the hospital after they were struck by a vehicle on W Broad Street this morning.

The three victims were and adult and two minors, all of whom sustained non-life-threatening injuries. Police said the driver of the vehicle remained on the scene and no charges have been filed at this time.

W Broad Street closed for roughly 30 minutes after the incident but has since reopened.

According to a release from the Falls Church Police Department:

At approximately 11:01 a.m. on October 7, City of Falls Church Police were dispatched to the report of pedestrians hit by a vehicle at the intersection of W Annandale Road and W Broad Street. Three victims — an adult and two minors — were transported to Virginia Hospital Center with non-life-threatening injuries. The driver of the vehicle remained on scene until police units arrived.

W Broad Street was closed for approximately 30 minutes after the incident. Police are still investigating the collision, and no charges have been filed at this time.