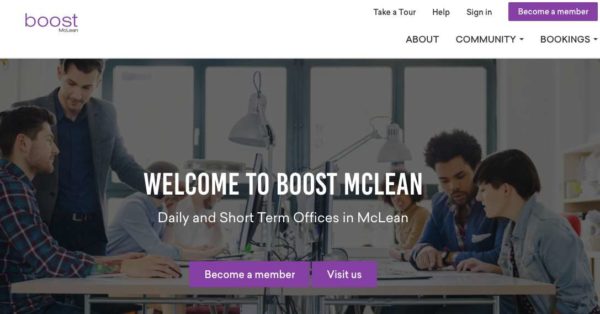 Passarelli is working on getting Boost McLean set up at 6731 Whittier Avenue in the aftermath of a pandemic that devastated the business built on a bunch of strangers working in close proximity in a shared space. The building is still under construction and Passarelli hasn’t moved into the full advertising push yet.

“We’re not marketing yet, but we do have a waiting list,” Passarelli said.

Instead of a sprawling complex taking up a floor or two of an office, building, Passarelli is putting together Boost McLean as something substantially smaller, around 40,000 square feet.

Passarelli said his goal is to serve the McLean business community, catering more towards being an office location for established businesses rather than chasing the latest startups.

The program will offer food and snacks, coffee, and beer and wine if an ABC permit is approved. Passarelli said Boost McLean will also offering catering services if people want them. There will also be wi-fi and printing capabilities.

“It’s a business center and small business club,” Passarelli said. “It’s not a WeWork for the younger crowd and startups, but for people who are a little further along in their careers and don’t want to go downtown but can’t work out of their homes.”

The project was in the works before COVID-19, but Passarelli said he’s made some changes to the program to adapt to the new challenges. Passarelli said the website will include a chance to see how many people are currently in the facility and an anti-microbial filter for the HVAC system.