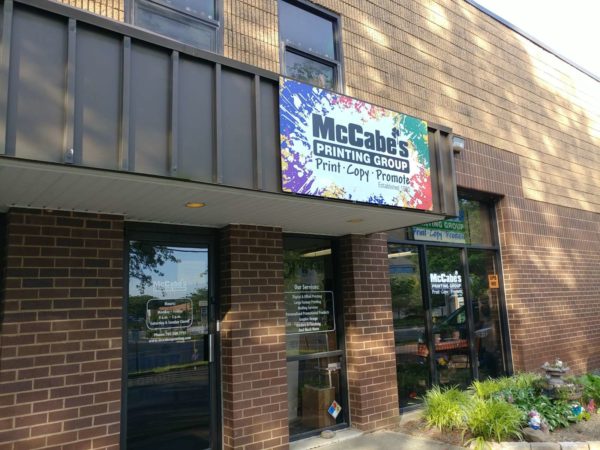 Finally, for the first time since March, McCabe’s Printing Group has seen a jump in sales.

The Merrifield based shop (8451 Hilltop Road), which typically specializes in promotional materials for schools and banquets, suffered a 50% drop in sales during the COVID-19 pandemic, according to operations manager Chris Ricci.

“Mid-March, everything dropped off the face of the earth in terms of work,” Ricci said. “It was kind of a shock, to say the least.”

But after forming a few new partnerships and changing tactics, Ricci said that the shop finally began to bounce back in August.

“I wanna say that businesses slowly and gradually reopening has definitely played a role in boosting morale,” he said, adding that the shop has seen a large increase for printed materials reminding people of safety procedures to prevent the spread of COVID, such as proper handwashing techniques and PSAs to wear a mask.

“We’ve been lucky,” Ricci said. “A lot of print shops had a lot of difficulties during this time, but the biggest goal is keeping at it.”

When the pandemic first hit, Ricci said that the shop received a federal PPP loan.

“That definitely helped us out, especially during the early months,” Ricci said. “We were one of the first ones to apply and get it.”

The shop is also awaiting a loan from Fairfax County, which Ricci is expecting to hit the accounts sometime next week.

Ricci said that he’s been with the company since he was a “wee little lad,” adding that he has family connections to the business.

For community members who want to keep supporting local and small businesses, Ricci said he wanted to remind people that there is a gap between the drive to support local shop owners in practice vs theory.

“The biggest disconnect that folks have is supporting local businesses but not supporting small business prices,” he said, adding that the printing industry has a very small sales margin to begin with.

Ricci encourages people to chat with the staff when visiting a small business, that way they can form a connection with other community members.

“There are not that many people at small businesses, so when you walk in, you could easily be chatting with the owner,” Ricci said.