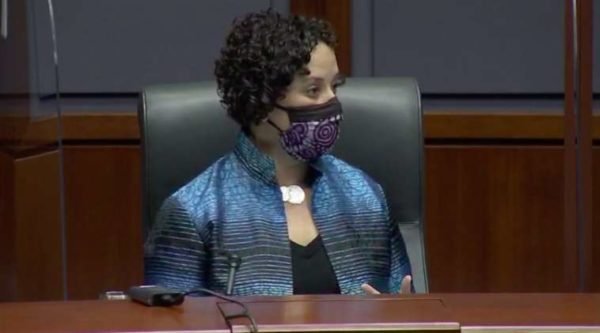 A controversy at the library level led to a heated exchanged at Fairfax County Board of Supervisors today (Tuesday) as the Board’s lone Republican pushed back against a motion to ensure the various boards and commissions consider the county’s standards of diversity.

Board of Supervisors Chair Jeff McKay started the meeting with a motion for staff to circulate the One Fairfax policy and training to all boards and commissions and that members sign acknowledgement to confirm they have received and reviewed the policy. The One Fairfax policy adopted in 2017 creates a standard of social and racial equity that the Board of Supervisors committed to considering when making decisions or developing programs and services.

Just now, the Board approved my motions to make sure our commitment to One Fairfax is extended to our Boards, Authorities and Commissions. pic.twitter.com/OvROKGY3Oc

The fight centered around what Supervisor Pat Herrity lambasted as an attack on Phillip Rosenthal, a Fairfax County Library Board of Trustees member who faces calls for resignation from Board of Supervisors Chairman Jeff McKay and others.

Backlash to Rosenthal’s comments was swift, but Herrity has vocally defended Rosenthal, who he appointed to the Library Board of Trustees in 2018. At the Board of Supervisors meeting, Herrity defended Rosenthal again and said the motion was a move towards silencing dissent.

“When we try to silence the other side we enter a slippery slope,” Herrity said. “To take someone out because they don’t agree with our political agenda… I think that’s a slippery slope.”

While McKay protested that the board matter wasn’t about an individual person, the text of the item did say “comments made at a recent Library Board of Trustees meeting highlight that we still have a long was to go before we truly become One Fairfax.”

“Things appointee said were hurtful,” McKay said. “I called for his resignation for a lot of reasons.”

Herrity found little support from the other members of the Board of Supervisors, receiving particular rebuke from Dranesville Supervisor John Foust.

“[Herrity] totally misstakes and mischaracterizes the statements Mr. Rosenthal has made,” Foust said. “Everything I hear about Rosenthal is that he’s a decent man who makes many contributions to our community, but his comments at the library board need to be read to understand why so many people were so hurt and why we’re being so misled by Supervisor’s Herrity comments about this.”

Foust ran through a list of Rosenthal’s controversial statements at the library board, which included calling Black Lives Matter activists Marxists and expressing frustration about a reading program aimed at supporting LGBTQ youth.

“To characterize them as Herrity does about the statement for the need for more diverse views in the catalog of books is ridiculous, outrageous, and totally misleading,” Foust said.

Supervisor Dalia Palchik, representing the Providence district, argued that while Herrity had appointed Rosenthal, what Rosenthal said and did reflects on the Board of Supervisors as a whole.

McKay’s motion was passed, with only Herrity voting against it.