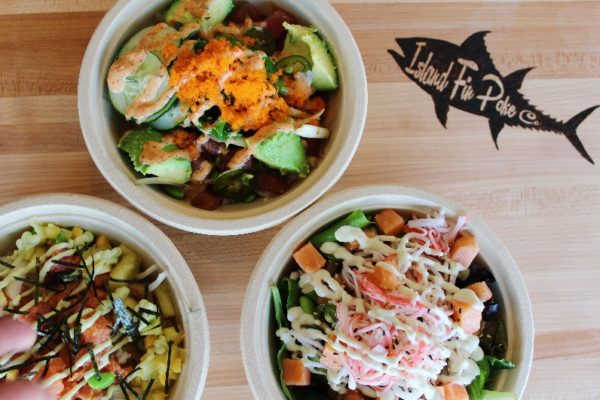 The eatery is set to open in the fall at 7501 Leesburg Pike, Suite 129 in Idylwood Plaza. That location will be the first one in Virginia for the Florida-based fast-casual chain, according to a press release.

“We are excited to expand to Falls Church because of the amazing food scene,” Co-founder Mark Setterington said in a press release. “We believe that the local residents will appreciate our family-oriented culture and personal attention given to every guest.”

Sarah Richter, a spokesperson for Island Fin Poké, told Tysons Reporter that the owner of the Falls Church location has signed a deal to also open the Vienna location.

“Plans won’t be made for Vienna until the Falls Church unit is up and running, so Vienna will be much later down the line, maybe in a year or so,” Richter said.

When the Virginia locations open, diners can expect build-your-own bowls that can be customized with eight proteins, sauces and more than a dozen toppings.

The Idylwood Plaza location will be open from 11 a.m.-9 p.m. every day, according to the chain’s website.

Founded in 2017, Island Fin Poké currently has eight locations across the U.S., from Nevada to Massachusetts. The chain opened an eatery in Bowie, Md. in January and is looking to grow in the D.C. area, the press release noted.

“Our Bowie location has been very successful and our expansion to Falls Church is just the beginning for the D.C. metro area,” Setterington said.

Island Fin Poké has 26 locations “in various stages of development across the country,” the press release says, noting that the chain is looking to rapidly expand by seeking franchisees.