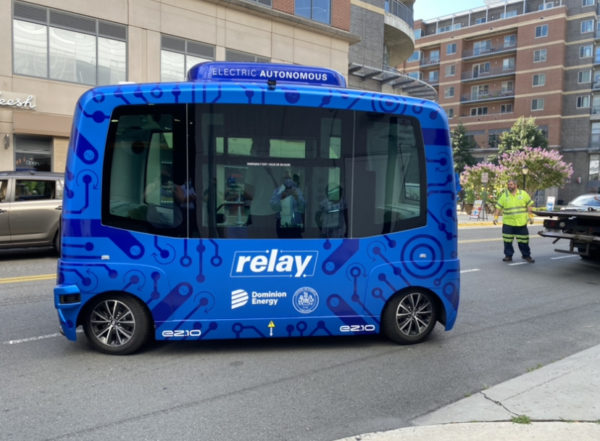 Relay is a free, driverless transportation option that will take people from the Dunn Loring-Merrifield Metro Station to the Mosaic District.

Yesterday’s testing was the beginning of a mapping process to teach the vehicle its route. In the learning process, the shuttle needs to stay on its route down to the millimeter, according to Dominion Energy’s Innovation Strategist Julie Manzari.

Testing and mapping usually take a few weeks or more with autonomous shuttles depending on the complicated nature of the route, according to Manzari. The route Relay will be taking is especially interesting due to busy roads.

Transdev will be in charge of the management and maintenance of the vehicle, which was made by EasyMile, according to the county’s website.

In a YouTube video, EasyMile engineer Nathan Ramsey said that the shuttle has several different braking systems, uses GPS and has a LiDAR system, which observes the environment with infrared lasers.

“Using LiDAR, the vehicle can’t miss objects. It will see everything around it, and it will respond accordingly,” Ramsey said. “So if it needs to slow down or stop because somebody runs out in front of it — even if they dart out in front of it just a couple, mere feet — the vehicle will have no trouble stopping or slowing.”

Ramsey said that he believes the shuttle is safer than human drivers, noting that the technology can respond safely to human error.

The shuttle will be enforcing mask requirements and separation as much as possible to ensure COVID-19 safety. They plan on keeping a seat between each passenger and requiring passengers to wear their seatbelts, according to Manzari.

“We have a lot of enthusiasm around the project,” said Manzari. “People are very curious about autonomous vehicles.”