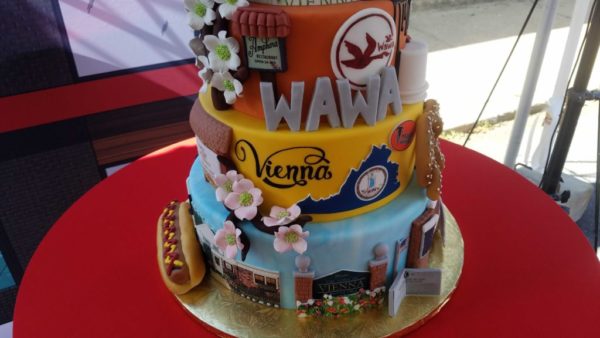 Wawa plans to open its first store in the Town of Vienna next Thursday (July 16).

The store at 465 Maple Avenue W. used to house a Coldwell Banker branch. Now, the building has been retrofitted — the first time ever for Wawa, according to a press release.

To commemorate the opening, a ribbon cutting will happen with social distancing outside the store on the morning of its opening. Wawa is encouraging people to watch a celebratory video and take part in an online contest for limited-edition Vienna Wawa t-shirts.

The store will open at 8 a.m. on Thursday, according to the press release.

Roughly 40 employees will work at the 6,290-square-foot store, which will offer Tesla charging stations. People who don’t want to venture outside for hoagies can get food and drinks delivered from the store via DoorDash and Uber Eats.

The press release detailed Wawa’s COVID-19 measures to reduce the risk of spreading the virus:

Wawa made several key changes to ensure it has the safest, most convenient store environment. The changes include launch of The Wawa Clean Force, a dedicated and trained sanitizing swat team working at each store every day with one job: keeping Wawa stores clean, sanitized and safe. Additional protections and policies include masks and gloves for all associates; clear plastic safety guards at check out and food-service counters; even more frequent hand washing standards; and wellness temperature checks for associates before each shift. For customers, social distancing with friendly visual markers and more hand-sanitizer stations have been added in common areas.

Wawa also plans to launch an initiative that will donate $1,000 from the Vienna store’s first week of sales to the Capital Area Food Bank and donate $1,000 each and hoagies to charities picked by Vienna’s police and fire departments and Fairfax County Fire and Rescue, the press release said.

Additionally, people will be able to make donations to support military personnel and their families until Sunday, July 19, at any Wawa store, the press release said.