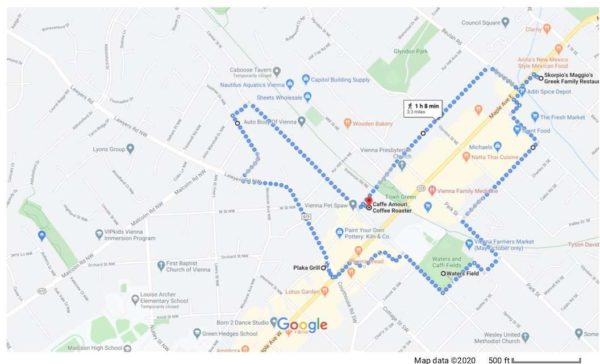 A 5K in the Town of Vienna raised more than $10,000 to help people facing food insecurity.

Hosted by Caffe Amouri and the Vienna Business Association (VBA), the “Feeding Families 5K” let people run or walk a route winding through the town during the month of May.

Small businesses, including Caboose Tavern, Grass Roots Fitness and PizzaRoni, provided more than 70 prizes and donated thousands of dollars to the race, according to the post.

“We also received thousands in donations from Vienna citizens, and had over 260 people participate in the run/walk!” the post said. All of the donations from the race are going to support local families facing food insecurity.

The race had four award categories: fastest time running or walking (under 60) and fastest time walking or running. Additionally, 67 prizes were awarded to people in a random drawing, the post said.

“We have such and amazing community and the generosity that has spilled out into various avenues of help during these trying times is just beautiful!” the post said.

While the race is over, people can still donate to the efforts to fight food insecurity by either contacting the Vienna VA Foodies Facebook Group or choosing the option to purchase grocery packs for families from Caboose Brewing. People can email Lydia Russo at [email protected] for more information.

Waters from the Potomac River could spill over into Fairfax County, with the D.C. area expected to get almost nonstop rain tomorrow (Friday), the National Weather Service warns. A Coastal…

The Fairfax County Police Department is grappling with high levels of understaffing and attrition, a problem that law enforcement officials warn could intensify in the coming months. During a public…

MetroWest residents no longer need to cross I-66 or Route 29 to grab a bite to eat. With developers’ plans for retail south of the Vienna Metro station still pending,…

Read more →
More Stories
Poll: How Do You Feel About Using Public Pools?Tips for Farmers Markets in a COVID-Era