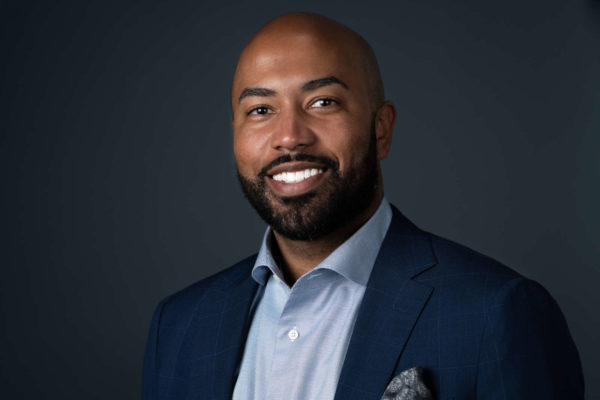 (Updated at 5:20 p.m.) As the Black Lives Matter movement sweeps across the world in response to George Floyd’s death, Fairfax County locals are taking to the streets to call for racial equality.

Already, there have been protests and marches in Reston, Falls Church and Vienna. An upcoming protest is slated to take place in McLean on Wednesday.

Tysons Reporter interviewed Sean Perryman, the president of the Fairfax NAACP, to gain insight into underlying issues in the community and how the group is advocating for solutions.

After graduating from the Vanderbilt University Law School and working as a civil litigator, Perryman decided to join the NAACP back in 2016 after Donald Trump’s election. Since becoming president in 2019, he has led the group to promote the NAACP’s mission to “ensure a society in which all individuals have equal rights without discrimination based on race.”

“I threw myself in because I didn’t like what I was seeing at the national level and wanted to get involved at the local level,” he said.

The Fairfax NAACP actually originated in the Falls Church area, which Perryman said is historically significant because the county government unjustly took land from Black owners in the area.

Though Fairfax County is thought of as a progressive and liberal area, “there is a history of violence here that often gets overlooked,” Perryman said.

Throughout the last several years, Perryman recalled several incidents of alleged police brutality and discrimination against Black individuals that he claims were overlooked by the public.

Just recently, a Fairfax County police officer was charged with three misdemeanor counts of assault and battery after using a stun gun on a black man, the Washington Post reported.

“The use of force here is disproportionate here for the police department [against black and brown people],” he said, adding that it is still better than some surrounding jurisdictions.

How Photos Can Influence the Perception of Law Enforcement

Roughly a week ago at a Black Lives Matter rally in Vienna, Mina Salama captured a photo of Vienna Police Chief Jim Morris kneeling, maskless alongside hundreds of other protesters.

Though Salama said she didn’t know that the officer in the photo was the police chief at the time, she said the moment and his position intrigued her.

Tysons Reporter is working to schedule an interview with Morris to talk about the photo and will update this story.

“I thought it was great — he wasn’t in the middle of the crowd. He was doing it on his own and just really feeling like he was a part of it,” Salama said.

Perryman said he didn’t want to be “cynical” and possibly discredit Morris’ true intentions behind the image, however, he said he wants to see progressive policy changes instead of social displays of support. He added that “nice” images of police kneeling don’t always portray an accurate representation of a situation.

“I don’t care about police chiefs kneeling or holding Black Lives Matter signs. Get your officers in check,” he said. “Make sure they are not abusing people. Give us transparency and data. Make real change, and anything short of that can just be seen as a photo opportunity.”

The Vienna police chief photo happened on the spur of the moment,  Salama said.

Before Salama ultimately decided to post the photo on Facebook, she said she struggled with the decision but decided that the image helped to accurately describe the atmosphere at the event.

“I kind of went back and forth about posting the picture [on social media] because in a lot of communities it’s done as a photo opp and this was more organic,” she said. “Nobody promoted him.”

Perryman claims students of color and students with disabilities are taken into police custody disproportionally compared to their white peers in Fairfax County Public Schools. 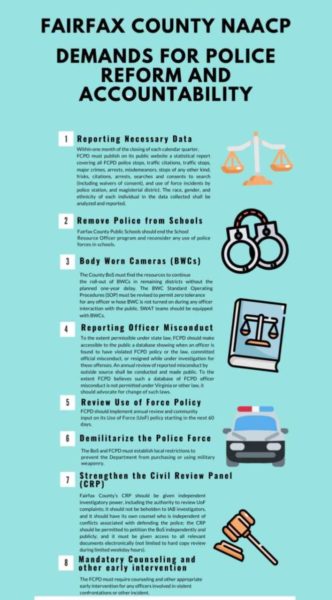 “Sometimes these were for issues like disorderly conduct,” Perryman said. “What does this mean? For a kid, does that mean they were just being bad in school?”

Perryman said that Fairfax NAACP’s efforts have been able to reduce arrests in schools by 60%. Still, he wants to see more done: “I’ve always said we need to get the cops out of schools and put in more counselors.”

In terms of One Fairfax, Perryman said he thinks the policy is good for “looking at things through an equity lens,” but added that the county’s school board and Board of Supervisors have a long way to go before the policy is more than “lip service.”

“You can’t have One Fairfax when you have a Robert E. Lee High School, and the school is named after a Confederate general who wanted to enslave black people,” he noted as an example.

The Fairfax County School Board voted in 2019 to consider renaming seven schools, including Mosby Woods Elementary School, named after people with Confederate ties.

In the next several months, Perryman said that the group will continue to push for police reform at the county, state and national levels.

If elected officials are determined to enact changes, Perryman said new policies could be in place within a year. For a complete list of NAACP’s agenda items, people can visit the organization’s website.

For people who want to keep rallying and showing up to protests, Perryman said that he hopes people will try to keep in mind precautions such as wearing masks and social distancing. Last week, Fairfax NAACP held a car rally where people could listen and participate in their cars.

If people want to support the NAACP, they donate or ask how they can be of service. Though some people requested that the NAACP help them organize rallies, Perryman said that isn’t the purpose of the group.

People can become better allies by educating themselves about systemic racism in American history, Perryman said.

“One of the best things to do is to Google the origins of policing,” he said. “Our policing system is relatively new and in the course of American history, the way we do policing originated out of slave patrols,” he said. “I think a lot of people are shocked by that.”

Perryman suggested books such as “Stamped From the Beginning” and “How to Be an Anti-Racist” both by Ibram X. Kendi, who runs an anti-racism center at American University in D.C.

“Historical context helps you to solve a problem and look at things in a different light,” Perryman said.