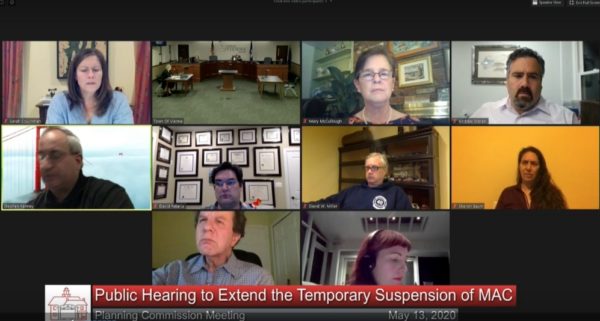 The zoning guidelines for the commercial area of Maple Avenue are “dead,” but what do Vienna officials do now with the body?

The Vienna Town Council adopted the now-controversial MAC zoning code in October 2014. Four years later, the town officials suspended it in 2018 — the MAC has been suspended ever since.

Last night, the Vienna Planning Commission tackled the question of what comes next for the code with two public hearings — one on extending the suspension to June 2022 and the other on repealing the MAC zone.

“A lot of people liked the MAC at the beginning,” Chair Stephen Kenney said, adding that some people weren’t happy with it once they saw the proposed developments. “We’ve never gotten the final answer [from residents] — ‘What do you like?'”

After some confusion on how to tackle the public hearings, they kicked off around 10 p.m. and the discussion on the proposals ended shortly before midnight.

The proposals received a handful of written comments and one call-in testimony from resident C. John Pott who said he favors repealing the code. A written comment from another resident urged for an extension: “I suspect there is a downside to premature repeal.”

Most of the discussion focused on the disagreement among the commissioners. While they agreed the MAC code is “dead,” they remained divided on whether it should get resurrected or buried to start fresh.

“I don’t see a reason to keep dead code on the books,” Commissioner Michael Gelb said. “I supported it initially but I think the experience has not been good.” Gelb indicated that he prefers repealing the code.

Commissioner Sharon Baum shared a similar sentiment: “It’s really hard for me to say this, but I really would like to see a repeal. I just see that the Town Council isn’t able to move forward for the last two years on this MAC.”

Several of them expressed frustrations about the lack of progress on revamping the code, saying there’s been little communication from town staff and councilmembers.

Commissioner Julie Hays said that a year has gone by without a joint work session with the Town Council on the MAC update.

Commissioner Andrew Meren initially wanted to extend the moratorium by only five months instead of two years to put more pressure on the Town Council to work with the Planning Commission.

“Even if there’s no new progress there are always going to be questions,” Meren said.

Commissioners who oppose repealing the code said it has salvageable parts and raised concerns about the message a repeal would send to future town officials.

While the pandemic has caused delays, she said the town can still keep working on the MAC rewrite.

“I don’t see any reason why these discussions can’t continue,” Couchman said, adding that virtual meetings have been working.

“To repeal code is to say there was a kind of failure,” Commissioner Mary McCullough said. “The MAC is not a failure. The MAC resulted in change… I think to repeal the MAC is to take the easy way out.”

At the end of the meeting, Couchman, McCullough and Meren voted against repealing the code.

Since most of the commissioners voted in support of both options, Kenney asked each one to send him a paragraph explaining which option they prefer and why. Kenney will pass along those comments to the Town Council.

The Vienna Town Council is set to revisit the two ideas in June.