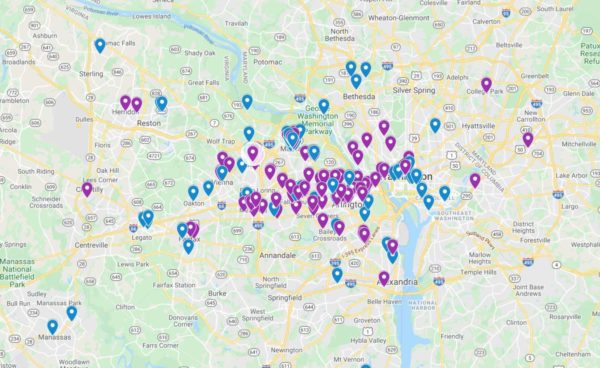 A list started by a woman to “help local businesses in McLean get the word out” quickly became a resource naming roughly 300 businesses and charities in the D.C. area.

The project, created by Lori Boerner, consists of a Google Doc and map, so people either seeking assistance or wanting to help during the pandemic can efficiently find an organization that suits their needs.

Part of Boerner’s inspiration for the project came from chatter from local forums and social media. She noticed that people wanted to help those in need but lacked a direct, coordinated list of resources.

“It was initially time-consuming,” she said, adding formatting the information and researching places took a substantial amount of time.

Now that the list is somewhat complete, she told Tysons Reporter that she still spends a few early mornings a week before work to update it with tips sent to her.

For example, the mother of a McLean teenager that works at Sweet Bites Café & Bakery told Boerner to help get the word out that the bakery is still open since its business has slowed substantially.

“A lot of it feeds upon itself — once people see it, they send things in,” Boerner said, especially since the list’s popularity continues to grow.

Since its creation, the list has been promoted by regional organizations such as the McLean Citizens Association, which Boerner is a member of.

Boerner had practice coordinating a similar list after she made one to assist people during the government shutdown in 2019.

“Things are different now and people are helping in any way they can,” Boerner said, adding that not everyone may be able to donate financially, but they can promote resources through social media channels and networks.