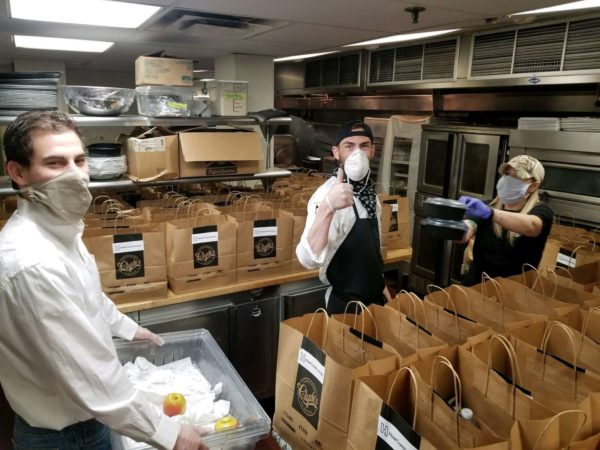 Two lifelong friends who work at Hoar Construction in Tysons and Clyde’s in Maryland recently teamed up to feed health care workers around the D.C. area.

By leveraging their connections at their companies, Bryce Yetso, the general manager of Clyde’s, and Mike Dramby, Hoar Construction’s senior project manager, said that they have handed out over $3,000-worth of food at two regional hospitals within the last few weeks.

Though Hoar Construction works on a variety of projects, Dramby specializes in hospital construction and expansion for the D.C. area office, so he said he was already somewhat familiar with the needs of hospital workers during this hectic time.

Meanwhile, Clyde’s was forced to furlough workers due to the COVID-19 pandemic, but was able to bring people back to work recently with the new request for meals, according to Yetso.

“Bryce was looking to get his people back to work and we were looking for a way to help front line folks,” Dramby said, adding that it made sense to join the two efforts together.

Hoar Construction managed fundraising efforts and coordination with the hospitals while Clyde’s was responsible for meal preparation and delivery, the men said.

Though Hoar Construction originally offered to front the meal order cost, Dramby said that almost all of his coworkers contributed to the effort.

Dramby told Tysons Reporter that his company has been especially busy during this time, because hospitals are investing money in wing expansions to boost capacity for the COVID-19 pandemic.

Going forward, the two men hope to cater meals to medical staff at two other hospitals in the near future.