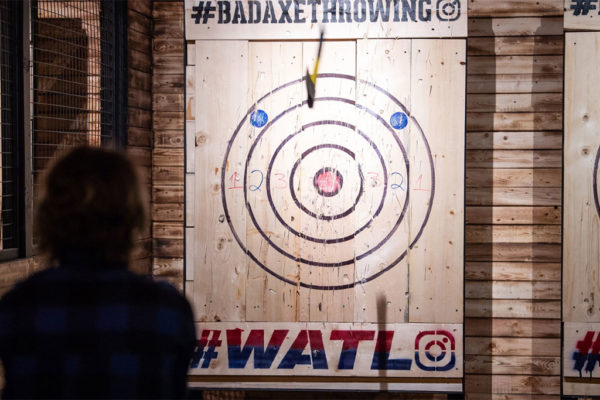 When restrictions start to lessen for Virginia businesses, what will the demand be for indoor axe throwing? Not high, according to Mario Zelaya, the CEO and founder of Bad Axe Throwing.

Started in Canada in 2014, Bad Axe Throwing had been popping up in dozens of spots around the U.S. and Canada until the coronavirus pandemic prompted temporary closures for the locations.

The Mosaic District spot (2985 District Avenue, Suite 195) opened in August and allowed groups to reserve spots or drop-in to use axe throwing lanes with throwing coaches in pre-COVID-19 times.

Currently, Zelaya said that all of the Mosaic District employees are laid off and the location is temporarily closed under Gov. Ralph Northam’s orders.

Now that Northam has a proposed plan to ease business resections, Zelaya said data from other Bad Axe Throwing locations will help determine reopening plans in the Mosaic District and for the rest of his portfolio.

“I know for a fact that people are not going to flood in,” he said. “The data we have from Atlanta and Oklahoma City is quite solid in representing that statement.”

The big quandary is how comfortable people will be going to a place for the recreational sport of axe throwing before there’s a cure for the virus, extensive testing or data showing a lower death rate.

While Zelaya says the “very grim” data points to a “long and difficult road to recovery” for his business, he doesn’t plan on closing any of the locations for good.

“We are going to open up [the Mosaic District spot] when we are allowed to and we will comply with state level mandates and suggestions while also implementing our own measures,” he said.

Those measures include completely wiping down all of the dedicated lanes and axes between group events, using every other lane to keep people 6 feet apart, reducing staffing and requiring people to book appointments.

The appointment-only model will be a shift for the Mosaic District spot, which he said was one of the few spots designed to cater more to walk-ins.

Zelaya said he plans to rehire based on seniority, calling it the “most fair and equitable way of doing it.”

“The other thing we want to factor in too is we don’t want to call people back if we won’t have any shifts,” he said. “We can’t have any staff sitting around. That is no longer a viable business option. Otherwise we’re going to bleed out.”

Zelaya has struggled with the federal government’s Paycheck Protection Program, which he claims is because he is a Canadian citizen who owns a large U.S. entity.

While he said he’s glad the PPP loans help businesses cover salaries while they are closed in April and May, he said that there needs to be more relief to help get businesses back open.

“If there is no bridge program transitioning people out of this recessionary period, there is going to be a mass influx of bankruptcies,” he said.

Zelaya said Bad Axe Throwing is in the process of receiving the loan in the program’s second round of funding: “My hope is that the money will get funded and that will help us weather the storm.”

People who want to support Bad Axe Throwing now can book a spot in advance, which means they have to put a deposit between $75-$80 for two people down to guarantee a private spot, dedicated lane and specific time.

Zelaya remains hopeful that Bad Axe Throwing’s target demographic — people ages 20-45 and “outside the at-risk zone for the virus” — will come back out and help re-stimulate the economy.

While he understands concerns about lifting restrictions, he stresses that businesses need the customers and clients.

“Although people may not support the government’s decision to open up the economy, I think everyone knows at least one person who owns a small business,” he said. “[Owners] are doing it for survival… We essentially are offered to become more in debt for something that is completely outside our control.”