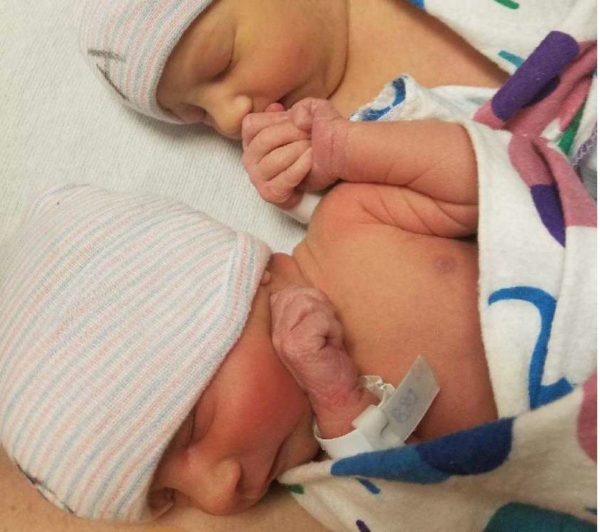 In times of uncertainty during the COVID-19 pandemic, many expectant mothers are facing unforeseen challenges — especially when dealing with the lives of newborn babies.

“I just feel the research out there is limited. I’m skeptical,” Nicole Sud, a Falls Church resident who gave birth to twins at the Virginia Hospital Center in Arlington on Wednesday (April 1), told Tysons Reporter.

Before her delivery date, Sud said she began to self-isolate — only leaving the house for doctor appointments — and had neighborhood friends help deliver groceries and essentials.

“The reaction varies — there are a lot of people who are much more nervous than I am,” Sud said while describing her plan for the next few weeks.

It doesn’t help that guidelines haven’t been solidified yet.

When it comes to breastfeeding and other concerns, the Centers for Disease Control and Prevention said breast milk usually provides protection against infection and has not been shown to transmit COVID-19 in “limited studies.”

Because of the lack of research, doctors are recommending that expectant mothers be sure to practice self-isolation and be sure to take care of themselves not only physically but mentally as well.

“While there is currently no evidence that you are more likely than anyone else to be infected with COVID-19, you may be at higher risk of developing a severe case,” Banulis wrote. A similar statement can be found online from the CDC.

For everyday care, OBGYN offices are taking extra preventative measures to help patients respect social distancing measures and ensure the health of their patients. Some are offering online resources and flexible appointment dates for women who are experiencing flu-like symptoms.

Before she delivered, she told Tysons Reporter that her primary care doctor didn’t recommend any additional steps for staying healthy beyond the CDC guidelines.

Though Sud wasn’t especially nervous about catching COVID-19 and passing it onto her child, she said that she was concerned about lack of support after the pregnancy.

While delivering her baby, the hospital mandated that she only be allowed one person outside of the medical team to accompany her in the delivery room. Though her plan was always to have her husband by her side, she said this was an unexpected measure.

“People in New York, for instance, cannot have a support person, including a spouse,” she said.

In the next few months, though, she said she was nervous for her lack of support at home. Family members who were supposed to fly to Virginia were forced to cancel their flights.

Luckily, the couple found help from an unlikely family friend already living with them. The family sponsored someone from Columbia on a cultural exchange program, who was unable to fly back home in late March because the country closed its international airports. They agreed to help the Sud family with their newborn daughters and stick around for a few more weeks, Sud said.

Inside the Delivery Room

When Sud was first checked into the hospital, she said the doctors gave her a surgical mask and a paper bag to put it in. Though she couldn’t stand to wear it in the room because of the heat, she said she made sure to put it on every-time she left the room.

Surgical gloves that would typically sit by the sink in the doctor’s office had been removed due to theft, Sud said.

While in the hospital, the couple said they were wary of local COVID-19 cases — especially patients that hadn’t been tested. Sud said hospital staff assured them that they had nothing to be worried about since there were no confirmed cases on the floor.

After Sud delivered the twins, Sud said she was disappointed that the hospital nursery was closed due to COVID-19 concerns. The couple chose Virginia Hospital Center partly so that the twins would be taken care of while Sud slept, she said.

Named Gisele Savita and Vivienne Parvati, the girls first weighed roughly five pounds each, Sud said, adding that they were healthy enough, with the exception of a few breathing issues, to be discharged the next day.

The three were allowed to go home early to avoid any extra chance of infection or exposure to the virus, Sud said.

To ensure that the couple’s 2-year-old daughter didn’t catch anything at the hospital and later pass along viruses to the newborns, her pediatrician suggested that the young girl live with Sud’s in-laws for two weeks before returning home.

“Your daughter would probably be fine, but if the twins get sick you would not have a two-year- old daughter that you would also have to take care of,” Sud said a doctor told her.

Upon discharge from the hospital, nurses simply included a COVD-19 packet among other materials typically given to mothers, Sud said.

Overall, Sud said she was thankful for the nurses and doctors who seemed extra attentive in light of everything going on.