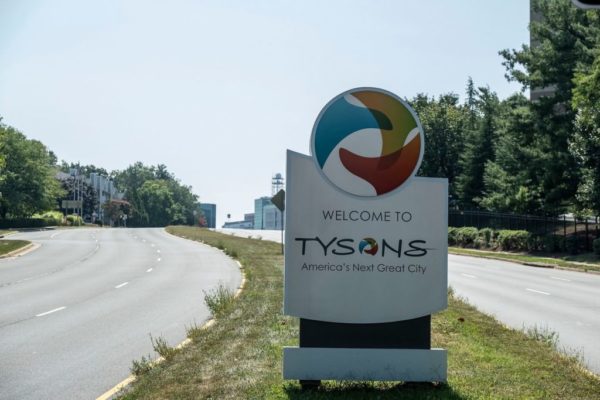 A rebranding effort currently underway aims to get people to identify all four square miles of Tysons as one place and not just the area by the two malls.

“It’s not about putting a new logo out there,” Drew Sunderland, the director of marketing and placemaking at Tysons Partnership, told Tysons Reporter. “The goal is to create a sense of engagement here that connects people to place.”

Sunderland said that Tysons Partnership has been working with Gensler since 2019 on a multi-phase branding effort.

“We did a very comprehensive intake of opinions and feelings from our members and also members of the community to get a feeling for the pulse here in Tysons,” he said.

In February, Tysons Partnership’s board approved the “strategic foundation” for the brand strategy, he said.

Tysons Partnership aims to reflect Tysons’ diversity in the new brand that can evolve as Tysons does, he said.

“You’re not talking about one monolithic, homogeneous, urban area — there’s a lot of different characteristics in Tysons,” he said.

As for Tysons’ eight neighborhoods, Sunderland said that the brand will let the neighborhoods and micro-communities — like The Boro — to “establish their own identities but within the greater umbrella of this Tysons brand platform.”

While the rebranding is underway, Tysons Partnership is also looking to establish a new business and funding model for the nonprofit association, which currently relies on members’ dues.

Sol Glasner, the president of Tysons Partnership, has called the members’ dues model “not sustainable.”

To help with the nonprofit’s constrained finances, the Fairfax County Board of Supervisors approved a $1 million grant for placemaking events, branding efforts, sponsorship and media outreach. Sunderland said that the grant has been matched by private members.

Sunderland said that relying on members’ dues meant that the group had limited resources when it made its “starter brand” about five years ago, which created decals on the water tank and street banners.

While sometimes lampooned, the use of the water tank for branding stemmed from its historical significance as a Civil War signal tower and convenience due to its height, Sunderland said, adding that people can expect it to be a part of the new branding effort.

“The water tower signage was sort of like a bat signal,” he said. “Tysons is more than just a mall.”

Another previous challenge was promoting pop-ups as part of the “Tysons experience,” Sunderland said.

“We struggled to get the word out that things were happening in Tysons and connecting new pop-ups to a bigger picture,” he said. “These things are not happening in a vacuum.”

People may start to see the new brand later this year, he said.

“We do want [people] to start thinking that the area that surrounds these four Metros is one place,” he said.