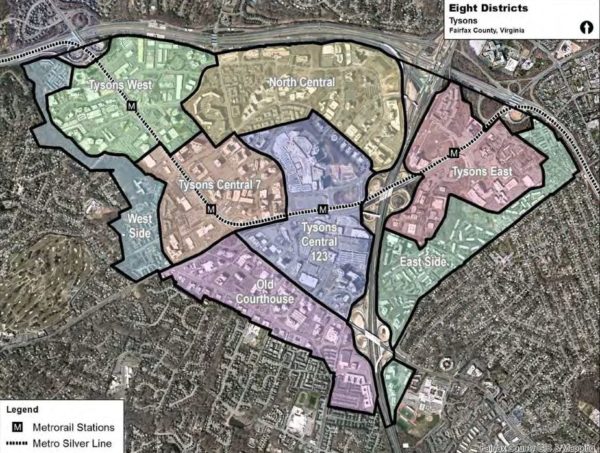 Tysons is larger than many people realize.

The triangular area under Fairfax County’s Tysons Comprehensive Plan extends from Magarity Road in the east to Raglan Road Park in the west, with its southern tip just north of Marshall High School. That’s about 3.3 square miles or 2,100 acres — larger than the area between the Lincoln Memorial, Union Station, and the Wharf in D.C.

It’s difficult to even talk about such a large area, much less plan for it, as a single entity. D.C. has its famous quadrant system, Paris has its twenty arrondissements, and Tysons has eight districts.

Fairfax’s award-winning 2010 comprehensive plan for Tysons is clear that “the transformed Tysons will be organized around eight districts, each with a mix of land uses.” That is to say, these aren’t zones that each exclusively focus on one activity — rather, each district will include residences, workplaces, shopping, recreation, and civic centers. Ultimately, the vision is for eight neighborhoods, each one supplying everything needed for daily life.

The planning for these districts also envisions specialities for each one, emphasizing different ways they can contribute to Tysons’ urban mix. No neighborhood will be a single-use zone, but they will nonetheless have certain specialties.

Visually, the districts are simultaneously continuous and distinct. Although there are clear boundaries on a map, those boundaries won’t be apparent in reality.

“Each district will be connected to the others,” the plan says. “Boundaries between the districts will be blurred as people move seamlessly from one place to the next.”

These eight districts have their own identities. The comprehensive plan “encourage[s] design elements that highlight the distinct character of each district,” largely through parks, plazas, and other public spaces but also through streetscape design, architecture, and land uses. In the same way that Capitol Hill and the Washington Navy Yard feel clearly different, planners hope that each neighborhood of Tysons will be unique.

It’s worth noting that, although Fairfax has provided provisional names to the neighborhoods, they’re not always the most user-friendly — and the county “may consider modifying the district names” as identity formation progresses.

In a series of upcoming articles, linked as they become available, we’ll examine each of the districts in detail. For now, we’ll leave you with a quick overview.

The first four of the districts each correspond to a station on the Silver Line. These districts, combined, are expected to account for 75 percent of future development and “will resemble intense and busy downtowns.”

The four remaining districts are farther from Metro stations and are envisioned as transition zones leading into the nearby neighborhoods. They contain some “areas that should maintain their existing characters, uses, and intensities.” However, just because they’ll be less dense than the preceding four doesn’t mean they won’t be urban — most of these areas are already as dense as much of D.C. and most lie within a 10-15 minute walk of Metro.