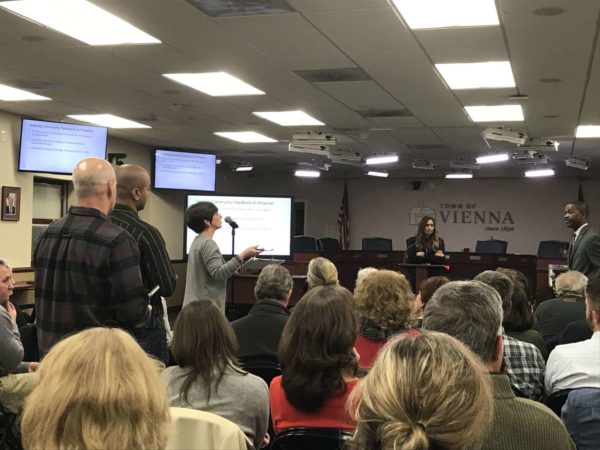 At a town hall on Monday, town officials and staff listened to dozens of residents’ thoughts on a proposal that would allow for more decks, patios and other types of “outdoor living space.”

Patel said that the proposal was sparked by people who said they didn’t know their builder had maxed out the lot coverage or couldn’t get out of their driveways safely because they don’t have a turnaround space.

“It’s open for modification, which is why we’re having this meeting tonight,” Patel said at the start of the meeting. “Should we allow 1%, 3% or 5%?”

Patel added that the proposal does not aim to encourage larger houses. 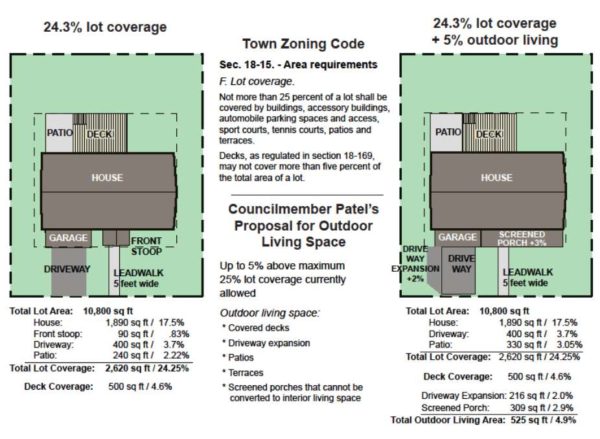 People who spoke in support of the proposal said that it could benefit people who live in older homes and fix drainage issues in the town.

Christine Silvia-Degennaro said she supports the proposal because she lives in a rambler and ran into zoning issues with her driveway when trying to put an addition on her house.

“I think that it would be a very beneficial thing for people to make this small adjustment,” she said. “We’re not speaking as somebody who has a 600,000-square-foot home. We have a very modest home in Vienna.”

Another person, an engineer, who spoke in favor of the proposal said that the stormwater management would fix drainage issues in the town.

Other residents opposed or critiqued the proposal, while a few said they have mixed feelings about the idea.

Some people said that people buying an expensive home in Vienna had a responsibility to be aware of lot coverage rules. “It’s not OK to claim ignorance,” one person said.

Other residents asked how the proposal would affect homes that have already been built versus future homes, raising concern that it could make a loophole allowing larger homes.

Shawn Thompson, who said he lives in a McMansion, summarized a NextDoor thread with concerns about privilege, protecting older residents, developers abusing rules and huge homes.

“It feels like privilege to me that the problem we’re having here is I bought my $1.5 million house and I don’t have even lot coverage left to put in the patio for a grill.”

Thompson said that he’s heard concerns from residents that older residents won’t be able to afford to live in the town.

“One of the reasons we all love Vienna is because grandma grew up here,” Thompson said. “Do we want grandma to have to move to Herndon or Loudon County?” 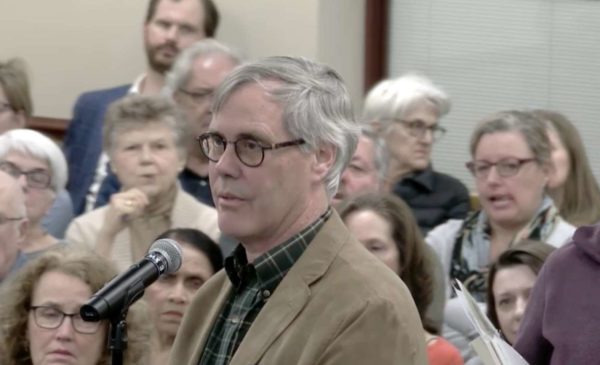 Meanwhile, Chuck Anderson, a former Planning Commissioner for the town, told the town officials and staff to be cautious with how they relax the lot coverage rules, if the proposal moves forward.

“Be very careful about selecting changing lot coverage rules on an ad hoc basis, because you don’t know the unintended consequences,” Anderson said, recommending that the lot coverage be considered on a comprehensive basis that could promote aging in place.

Sarah Couchman, the current vice chair of the Planning Commission, said that the proposal would boost her landscaping business, yet Couchman said that she’s concerned about developers building to the limit.

Ultimately, town staff said that they are looking to get more data and bring on a consultant as they consider reorganizing the zoning code, which hasn’t been overhauled since 1969.

Residents can submit comments and fill out a questionnaire through Monday, March 9. 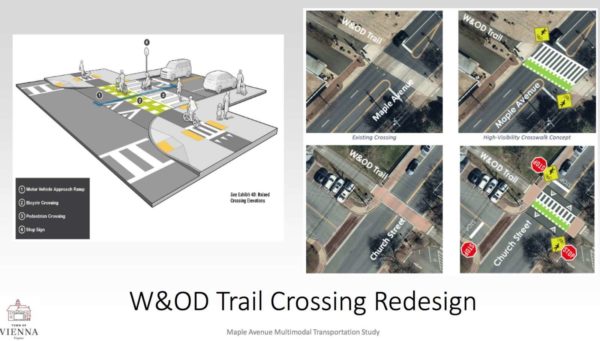 During the second half of the meeting, attendees were asked to prioritize recommendations from the Maple Avenue Corridor Multimodal Transportation and Land Use Study.

The 16 near and mid-term recommendations range from under low cost to up to $150,000. They include:

The town asks that people rank their priorities online or on a paper version by 5 p.m. on Monday (March 9).

“We hear stories and we’re not sure how many people are affected,” Patel said about the significance of the town hall. “It’s important that we get a sense of what the community wants.”

Three images in story via Town of Vienna