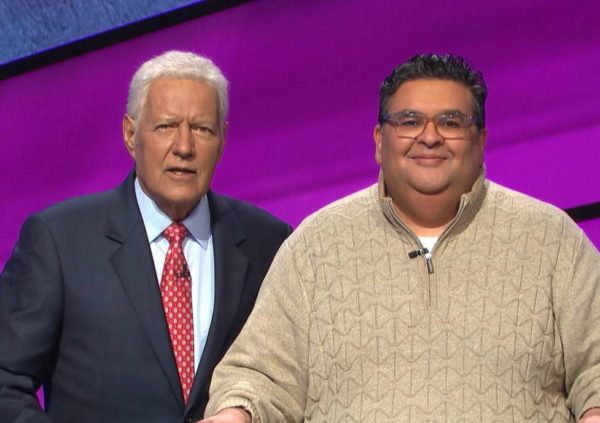 Editor’s Note — This is a guest post written by Saira Uttamchandani, an eighth-grader and Falls Church resident, that was submitted by her mom Komal Mohindra. The story has been lightly edited.

My dad has never been an overly emotional type. But the day that he found he’d be on the trivia show “Jeopardy!,” he let out an uncharacteristic whoop of joy.

My dad, Mahesh Uttamchandani, was introduced to the trivia show in 10th grade when his teacher didn’t feel like instructing one day and had no lesson plans, so he played an episode of “Jeopardy!” instead. That day, he fell in love and he has held that torch ever since.

In December, my dad received a thrilling call that invited him to Los Angeles for the taping of the show. He went through a rigorous testing process in the lead up.

Our family flew out to L.A. on a Saturday, so we had a few days before my dad was scheduled to tape his show on Tuesday to do some sightseeing. I had never been to L.A. before, so I enjoyed eating In-N-Out and seeing the Walk of Fame and the Santa Monica Pier.

Then, Tuesday arrived, and we could not have been more excited. My dad had to get up at 5 a.m. to get to the studio on time, to get his makeup done, fill out paperwork and be prepped on the rules and protocol. My mom, sister, uncle and I instead got to sleep in and be there at 10:15 a.m. instead.

The guides led us into the studio and my breath caught in my throat. The studio smelled and was very cold. There are two sections — one for the audience — and one for production guests and friends and family of the contestants.

During the commercial break between the first round of questions and Double Jeopardy!, Alex Trebeck, the host of the show, let the audience ask him questions, which was amazing. For example, we got to ask about his favorite pizza toppings, his back up career plans and his most memorable contestants.

One interesting thing about “Jeopardy!” is that they tape all of their episodes for a week in one day. The contestant match-ups for each episode are completely random, so some contestants, like my dad, were at the studio all day.

Each episode takes around 30 minutes to film, provided there are no malfunctions or retakes needed — like if Alex reads a question incorrectly. In addition, the episodes are filmed months in advance, so my dad’s show will air on March 6, but was shot on Jan. 7.

There was a small break for lunch after the third episode and the contestants were taken to the Sony cafeteria on set, but we were not allowed to dine there because the contestants had to stay sequestered in case we somehow got the answers to the questions.

My dad was in the last episode filming that day. One thing I noticed was that there is a very tiny window where contestants can buzz in and have a chance to be called on. You’re supposed to buzz in during that perfect window after Alex finishes reading a clue, but before lights on the side of the game board flash — otherwise, you miss your chance.

My dad struggled with the buzzer in the first round but managed to answer a few questions correctly.

I won’t spoil the ending for you but I invite you to watch on the episode on Friday, March 6, and cheer on one of your Tysons neighbors!