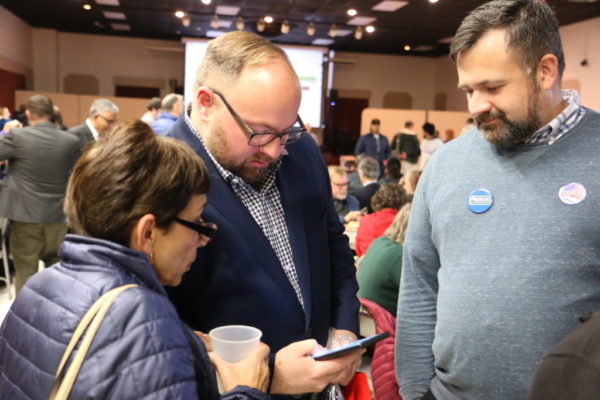 Tysons’ new school board member supports efforts to have Fairfax County Public Schools go green, but has concerns about how the goals are being met.

Karl Frisch, the newly elected school board representative for the Providence District, held office hours with community members last Friday (Feb. 13) in Merrifield to discuss the progress of ongoing initiatives.

The changes include Dominion Energy testing eight electric school buses around Fairfax County and the county installing solar panels at roughly two dozen schools in the Providence District, according to Frisch.

The decision to install solar panels was made possible by Fairfax County’s new Solar Power Purchase Agreement (PPA), according to Frisch’s newsletter.

As for the school buses, Frisch said while running for office that they were one of his top goals. (The initiative also supported by Del. Mark Keam (D-35th District) and groups like Mothers Out Front Fairfax.)

Now, as the program is becoming a reality, he said it is a “fantastic” opportunity for the district.

“Dominion Energy will cover the difference in cost so that school districts pay no more for electric buses than they would for diesel models,” according to the FCPS website, which added that the company will also cover the cost of the charging stations.

For the news buses, FCPS will only be paying around $150,000 of the $325,000 for an electric school bus, plus the added cost of seat belts and the cost of electricity to run the buses in place of diesel fuel, Peggy Fox, a Dominion Energy spokesperson, said.

By replacing diesel school buses with an electric option, FCPS will save 60% on maintenance costs, according to Fox.

But, Frisch also told Tysons Reporter that he is hesitant about Dominion’s potential long-term control over the bus program and said he would prefer to see a competitive bidding process before FCPS agrees to work with the energy company to electrify the school’s remaining 1,600 bus fleet.

Fox said that Dominion approached FCPS with the initial opportunity and those within the district were enthusiastic to accept the offer. “We are doing it on our dime because we think it is so great,” she said.

An electric bus bill that was originally sponsored by Keam was shut down — the bill that would have allocated more state funds toward this initiative and eased the pressure to involve Dominion Energy, according to Frisch.

“The bill that made it through the House [of Delegates] was a different bill,” Frisch said. “If that’s what ends up becoming law, then our electric school buses will be tied to the hip to Dominion.”

Despite the concern over the cost, Frisch said he still supports the initiative and wants to move forward toward carbon-neutrality.

By 2030, Dominion wants 100% of the school buses in the company’s service zone in Virginia to be transitioned into an electric fleet, according to Fox. “We are thrilled the legislature is helping to move this forward,” she said.

Both Frisch and Fox agree that electric buses will be healthier for the school kids who depend on them and will help ease the carbon imprint on the environment.

Going forward, Frisch said he isn’t sure when the electric school buses will officially join the fleet, but Fairfax County said they’d likely hit the road by the end of the year.