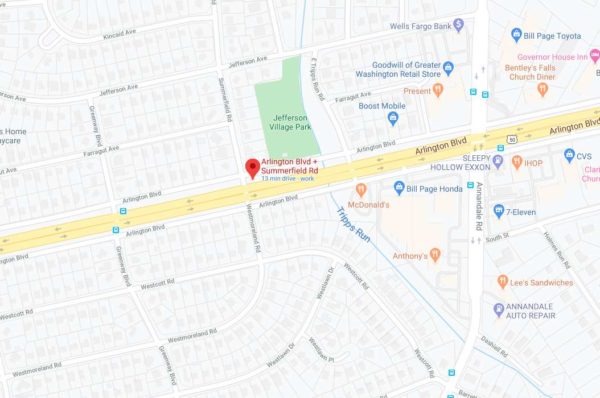 Fairfax County police say a man was arrested in connection to a fatal hit and run on Arlington Blvd (Route 50) in the Falls Church area last January.

Police said a pickup truck struck and killed 93-year-old Pericles Apostolou, from Falls Church, when he was crossing Arlington Blvd outside of the crosswalk near Summerfield Road around 6 p.m. on Jan. 18, 2019, police said.

“The truck did not stop and drove away from the scene,” police said last year.

FCPD announced today (Wednesday) that 30-year-old Michael Smith, of Fredericksburg, has been charged with felony hit-and-run.

“Detectives from our Crash Reconstruction Unit worked extensively to identify the suspect,” according to a press release. “Through their investigative leads and tips received from the community, Smith was identified and arrested by Manassas City Police on Feb. 6.”

Smith is currently being held at the Fairfax County Adult Detention Center with no bond, according to police.

Police said they are also working on three unsolved, fatal hit and run cases from 2018 and 2019, which includes one on Leesburg Pike near I-495 last February. Police are asking that anyone with information about this case or the other three to contact them at 703-280-0543.