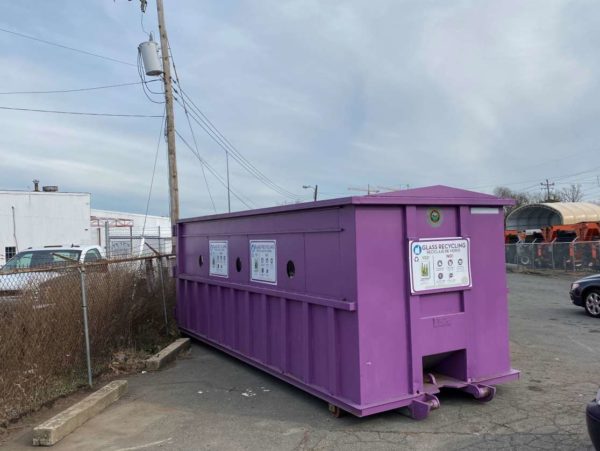 “Going green” will take on a new meaning in Falls Church as the city joins a larger initiative to separate glass products from the rest of the recyclables on the curb.

Beginning Feb. 19, the City of Falls Church asks that residents separate glass from their normal recyclables and instead bring them to the local recycling center (217 Gordon Road) — where items will go in special purple bins for processing, according to the city’s website.

Neighboring areas, including Arlington County, are also taking part in the initiative.

If residents do not want to make the extra trip to the recycling center, officials ask that people simply throw glass items in the trash — or better yet, find a way to reuse their glass jars for storage, vases, drinking glasses, planters, or craft projects.

According to a press release from the city:

Glass is no longer economically or environmentally sustainable in a single-stream recycling system. Glass is heavy, which increases the cost of transporting recyclables to and from recycling centers. Glass containers placed in single-stream curbside bins tend to break during collection and transport to Material Recovery Facilities (MRFs), which can then damage machinery and contaminate bales of other more valuable items.

To encourage participation in the new recycling program, the city is participating in the “Purple Can Club Pilot Program” alongside other districts within Northern Virginia.

“I believe we are the last in the region to join. We were evaluating options, and the centralized Purple Can was chosen as the pilot program,” a city spokesperson said.

Officials are asking residents to thoroughly rinse out or wash items before recycling them.

For people living in an apartment or similar community, the website said to check with a landlord or property manager about the changes.

Anyone looking for other purple can recycling sites can check out the map below.

Map and photo via City of Falls Church