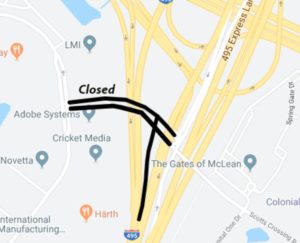 Drivers should plan to avoid Scotts Crossing Road in Tysons this week due to a series of closures at night.

The Virginia Department of Transportation announced that the road will be closed between Jones Branch Drive and the I-495 Express Lanes starting tonight (Nov. 18) until Friday, Nov. 22, from 9:30 p.m. to 4 a.m. the following day.

The closures are related to paving as part of the Jones Branch Connector project, according to VDOT. Several detours will be in place for drivers.

The Jones Branch Connector project expects to have two lanes in each direction open by the end of the year and final completion in early 2020, according to VDOT.