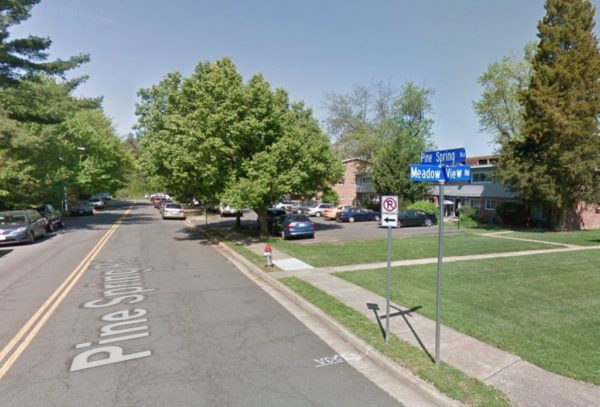 (Updated at 12:55 p.m.) A man was shot last night (Thursday) in a residential area off Lee Hwy in the Falls Church area, according to the Fairfax County Police Department.

The incident occurred around 7:45 p.m. in the 2800 block of Pine Spring Road, which is near Pine Spring Park, the Trinity School at Meadow View and Pine Spring Elementary School. The area is surrounded by homes.

The man was shot outside and was transported to the hospital with non-life-threatening injuries, Sgt. Greg Bedor, a police spokesperson, told Tysons Reporter.

“A male reported he was outside of his home when he was approached by someone who shot him,” according to the daily crime recap. “The suspect fled; no additional description was provided.”

Bedor said that there was no threat to the public. “We think this was not a random incident,” he said.

Despite some confusion on Twitter, the incident is not related to the hit and run that killed a pedestrian in Fairfax, Bedor said.

END_OF_DOCUMENT_TOKEN_TO_BE_REPLACED

More Stories
Veterans Day Events and Closures Around the Tysons AreaJUST IN: Firefighters Working to Extinguish Garage Fire in McLean