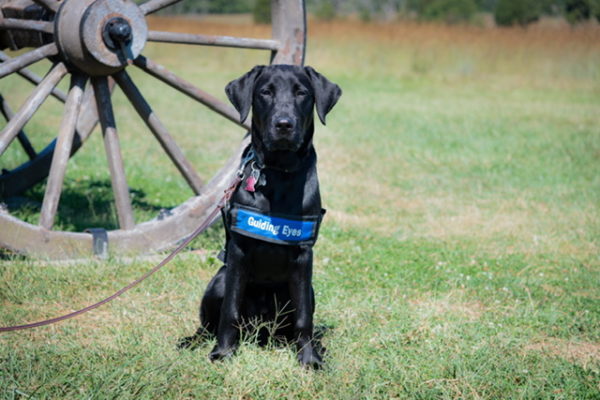 A Vienna family is raising a furry friend before he moves to New York — in search of a larger purpose.

Jennifer and Ellie Butler, a mother and daughter pair, volunteered to foster a dog under Guiding Eyes, a New York-based organization that pairs guide dogs with people who need them.

Percy, a black labrador, arrived at their doorstep in May when he was just a little over 12-weeks-old and now is in the midst of by-weekly general training, the Butlers said.

The family decided to participate in the program after a suggestion from 18-year-old Ellie, who offered to take on the primary responsibility for Percy. Ellie was inspired by the documentary “Pick of the Litter,” Jennifer said.

Jennifer said the pair splits up the work. Jennifer brings Percy to work and Ellie takes care of him after she gets off from Flint Hill High School at 3 p.m.

Once a week, Percy will attend doggie school and has the chance to play with about a dozen other local guide dogs in training, Jennifer said. Percy is a “very good boy” because he listens to commands, stays in his crate at night, doesn’t eat before he is given permission and doesn’t bark, she added.

“You could tell people already worked with him by the time we got him,” Jennifer said.

Guiding Eyes provides guide dogs to those in need — free of charge, according to their website. They also cover all of the costs for foster families except for the food, Jennifer said.

He will take an aptitude test to determine what his path will be, Jennifer said, adding that she could see him helping law enforcement because of his strong nose or assisting children because of his calm personality.

“I think he’d do well with just about anyone as long as they love him,” Ellie said.

The love given to Percy from the Butlers has been reciprocal, the family said.

“I’ve always been a little shy until I got this dog. You have to speak out for the dog since they don’t have a voice,” Ellie said. “I learned to speak up and be more outgoing.”

Ellie hopes to foster another Guiding Eyes dog in the future, she said.

“With Percy leaving, I thought at the beginning, ‘Oh it’s going to be fine,'” Jennifer said.  “But we’ve grown to love him.”