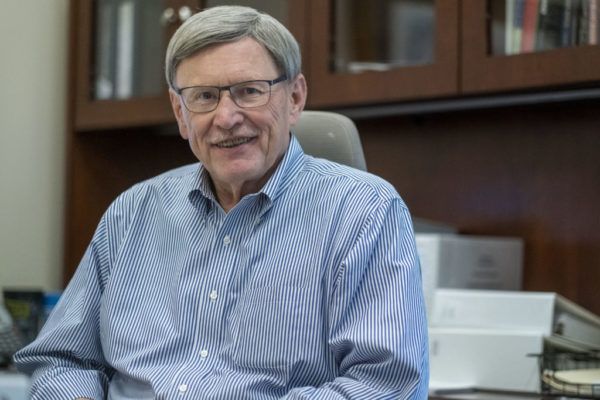 Editor’s Note — Tysons Reporter is running Q&As with the candidates running for the Dranesville and Providence District seats on the Fairfax County Board of Supervisors this week. The stories have been lightly condensed and edited for clarity.

Featured here is Democrat John Foust, who is running against Republican Ed Martin for the Dranesville District seat, which represents McLean, Great Falls, Herndon and portions of Vienna and Falls Church.

John Foust is hoping that the upcoming election will land him another term representing people in McLean on the Board of Supervisors.

First elected to the board in 2007, Foust currently serves as the chairman of the county’s transportation and information technology committees, along with chairing the Fairfax County Economic Advisory Commission.

During a recent candidate debate in McLean, Foust pointed to his experience on the county board — pointing to the expansion of Balls Hill Road at Georgetown Pike to address traffic and the widening of Leesburg Pike (Route 7).

Tysons Reporter met up with Foust in his office to ask about how he would tackle affordable housing and capacity issues at public schools and what his top infrastructure priorities are if he is re-elected for another four-year term.

Tysons Reporter: Do you any plans to encourage the use of wind and solar polar among constituents. If so, how?

John Foust: Definitely. We are particularly with solar we at the county level have 130 or so buildings that we are looking at putting solar on, but with the constituents we are going out to the community with the CECAP — a community-wide energy and climate action planning process — and part of that is going to be looking at the possibility of solar on residential and commercial buildings in Fairfax County.

TR: As people come into the area, what do you say are your top priorities to stay and age in place?

Foust: At the county level, we have a 50+ Committee that has developed a lot of programs and services to address the senior population and to help them stay in their homes. Locally, I have established three different groups — one in McLean, one in Great Falls and one in Herndon — to help seniors and people with disabilities stay in their homes and stay in the community.

Each one has taken is set up to be run by volunteers and community leaders, and each one has taken on a slightly different angle on how they are going to do that based on what they think the most immediate needs are in their particular community.

For example in Herndon, it’s almost exclusively designed around transportation and getting seniors rides to their doctors and to wherever they need to go. It’s the most common complaint we hear from seniors is that they don’t have transportation.

So then we have in Great Falls, which is a semi-rural community and people don’t see each other on a regular basis all of the time, they focus more on a social environment. In McLean, it has been very active. We’re focusing a lot on education and resources.

TR: Anything you haven’t done yet that you would want to do to help people age in place?

Foust: The most important thing we can do for some people is to get the economy going to the point where they have a strong economy that can provide tax relief. That’s a very expensive proposition but it’s also something that is contributing to the difficulties seniors have staying in their homes.

We — Fairfax County and all counties in Virginia — our primary funding source is property taxes and so there are programs available to provide relief to seniors but they are not very generous and they can’t be until we have other revenue sources to subsidize that relief.

TR: What about home-sharing?

Foust: We’ve talked about it on numerous occasions. There are obviously issues having strangers come into your home and being responsible for some of your care. So there are issues but there are nonprofits that I think take the issues on and make that happen. And it would be a very positive development if we had that. It would provide another choice.

TR: How do you want to approach affordable housing? What do you think the county can do to make sure there are enough units for young professionals coming in?

Foust: The market pretty much delivers the housing we need for the people earning 120% or more of the AMI — the area median income. We use inclusionary zoning to try to create a significant inventory of what we would call workforce housing, which is in the 80-120% of AMI in and around the Metro stations. But then for 80% or 60% of AMI or lower, it’s a huge challenge and that’s the affordable housing market that we as a government have to be more involved in, whether it’s creating incentives or financial participation.

We, as a board, we have made a commitment to have delivered 5,000 units of affordable housing for people earning 60% or lower of the AMI over the next 15 years.

TR: Do you think the county needs to do more for affordable housing? Or is the track you’re on right now —

Foust: — No, the track we’re on right now isn’t — it’s a much better track, but it’s not going to lead to fully satisfying the demand. So that’s why we have other tools that we use. And we have Phase 1 of the Strategic Plan identified 25 different things that we could be doing. For example, big things like working with nonprofits [and] making government-owned land available.

TR: What are your top three transit infrastructure priorities?

Foust: Completing the Silver Line is absolutely critical. Creating and expanding a bus rapid transit network between activity centers in the county. And expanding the general bus service feeding the Metro stations on the Silver Line.

TR: Overall, how do you think the county can better approach capacity issues at the public schools?

Foust: You have to look at adjacent school districts and see if there are dramatic capacity differences and if so, whether there is are adjacents that can be made with community support to utilize the capacity at schools that are underutilized and relieve the pressure on schools that are over capacity.

You also have the Capital Improvement [Program], which require significant funding. So we made significant increases in capital improvements for schools currently at $180 million a year under bonding authority. In all probability, that number should be higher and we need to continue to look at that and try to get more projects done.

And generally, other outside funding via bonding in other areas to deliver more annual funding streams to focus on capital improvements and renovating the schools and increasing capacity.

TR: I’m assuming it’s different trying to address it before it becomes an issue than have to go back and try to fix it.

Foust: Yeah. We just have to bite some bullets and build some new schools. Eventually, we have built very few new schools in the county in the past decade and [the] population continues to grow.

But that gets you so far and at some point, you’re going to need to get some new schools. The one in Tysons is very high on my priority for the elementary school, especially. They have the land proffered to us, given to us by a developer. And it just needs to be incorporated into the school’s CIP and built.