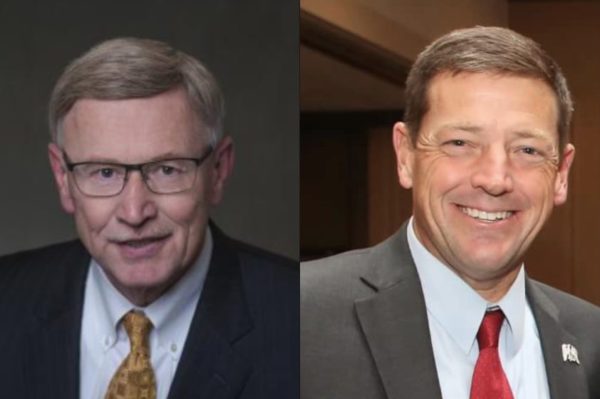 The two candidates vying for the Dranesville District seat on the Fairfax County Board of Supervisors debated last night in McLean.

The debate was hosted by the League of Women Voters-Fairfax Area at the McLean Community Center last night. Incumbent John Foust and Republican Ed Martin sparred on issues ranging from traffic congestion to gun regulations.

While they both agreed that it’s difficult to afford to live in the county and that focusing on climate crisis is important, the two men took very different approaches to how they would tackle the issues in the audience-submitted questions.

Foust pointed to his experience on the county board — he was first elected in 2007 — to emphasize that the local government will continue to make progress, pointing to the expansion of Balls Hill Road at Georgetown Pike to address traffic and the county’s conversion of existing streetlights to LEDs.

“We’re doing what’s necessary to prepare for the growth,” Foust said in response to a question about infrastructure and population growth. “[We need to do] more of what we’re doing.”

Meanwhile, Martin, who currently lives in Great Falls, pushed for lower taxes, more pressure on Richmond and Maryland Gov. Larry Hogan about the traffic on I-495 and reconsideration of the One Fairfax policy — a social and racial equity policy.

“I reject One Fairfax,” Martin said, adding that equity is in the eye of the beholder. “Don’t we like equity? I like exceptional.”

While the debate was mostly civil, the conversation became heated around guns and whether Fairfax County should be a “sanctuary county.”

Foust passionately said that he supports banning guns from public facilities. “It’s scary. It is not fair to people,” he said.

While Martin said that he would defer to law enforcement’s opinion on guns in public facilities, his answer mostly criticized Foust for not taking enough action on the trailers at McLean High School.

“Having trailers behind a school is not safe,” he said before transitioning to his position that sanctuary counties can lead to violence.

Foust responded that he wants to see the trailers go away as well. While Martin noted safety several times throughout the debate, Foust said that Republicans wanting to limit gun regulations have made “none of us safe.”

“We are constantly rated the safest community for our size in the country,” Foust said, adding, “We are not a sanctuary county. I will tell you, we don’t go out and enforce civil warrants by ICE.”

By the time the debate wrapped up, the candidates had taken several jabs at each other.

Martin said Foust’s “I delivered” statements show Foust is part of antiquated leadership, while Foust dragged Martin for being a newcomer to the area — “I have never seen you at a community event” — and also for not filing some of his campaign finance reports.

Images via Fairfax County and voteedmartin.com