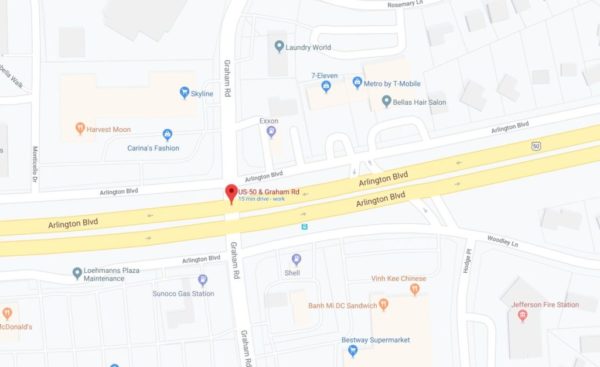 (Updated at 11:50 a.m.) Fairfax County police have identified the man who was fatally struck by a police cruiser along Route 50 in the Falls Church area yesterday.

“We do not have a current address at this time,” police said in a press release today. “Next of kin have been notified.”

A patrol officer who has more than four years of law enforcement experience and who is assigned to the Mason District Station was driving in a marked police cruiser in the area of Arlington Boulevard and Graham Road. The officer was responding to a call for service for disorderly subjects.

The marked police cruiser was proceeding through a green light eastbound on Arlington Boulevard approaching the intersection of Graham Road.

This intersection has a pedestrian crosswalk with a pedestrian signal for the crosswalk. The posted speed limit for Arlington Boulevard in that area is 45 miles per hour.

As the police cruiser proceeded through the intersection, an adult male was struck in the left travel lane of Arlington Boulevard by the cruiser. The location of impact was within the crosswalk as determined by the police cruiser in-car video.

The officer immediately stopped to render first aid and called for the Fire and Rescue Department. The pedestrian was transported to the hospital by rescue personnel and was pronounced deceased.

“The best information we have right now is that the officer did have a green list, was proceeding through the intersection and that the pedestrian was, unfortunately, crossing against the ‘Don’t walk’ sign,” Chief Edwin Roessler Jr. said during a press conference yesterday.

Montoya’s death marks the 14th pedestrian fatality in the county this year, according to police.

“This is an intersection that has a historical issue with pedestrian safety,” Roessler said at the press conference.

Cyclist and pedestrian advocates are urging people to attend a meeting tonight (Monday) about changes to Route 50.

The Virginia Department of Transportation (VDOT) is looking to get community feedback about a Route 50 study currently underway to identify potential safety and operational changes for Route 50 between Jaguar Trail and Wilson Blvd.

The Fairfax Alliance for Better Bicycling (FABB) took to social media to urge people to attend the meeting.

Bruce Wright, a board member of FABB, said that the Graham Road and Route 50 intersection was identified in 2004 “as a big problem” for pedestrian safety and is “still very dangerous.”

“It is such an important corridor and yet it’s optimized for motorists,” Wright said.

FABB is working with local police to identify where bicycle crashes are happening, Wright said, adding that the group wants to work with VDOT as well.

The crash is currently under investigation and is working to determine the cruiser’s speed, the lighting conditions at the intersection and the condition of the pedestrian walk sign, along with a forensic medical examination, police said.

“The results of the investigation by the Crash Reconstruction Unit will be presented to the Office of the Commonwealth’s Attorney for Fairfax County,” the press release said.

Anyone with information about the crash can contact Crash Reconstruction Unit detectives at 703-280-0543.

“The involved officer was reassigned to administrative duties pending the outcome of our investigations by the Crash Reconstruction Unit and the Internal Affairs Bureau,” police said.