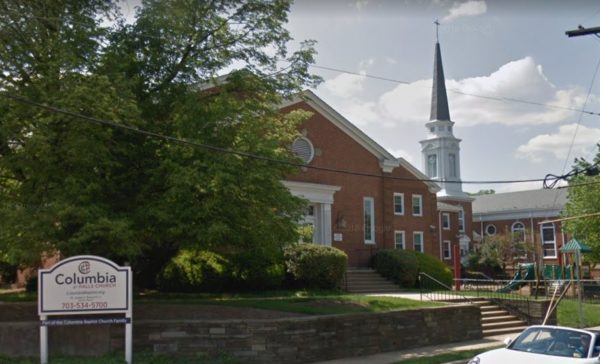 Columbia Baptist Church is ironing out parking and height issues linked to its expansion plans in the City of Falls Church.

The church wants to add a one-story, 33,000 square-foot building addition, along with a new sanctuary space with 1,192 seats, expanded paved surface parking and relocation of the parking lot and driveway along N. Maple Avenue.

The church (103 W. Columbia Street) is also seeking a variance that would allow the steeple to go 55 feet above the maximum height of 70 height to help bolster’s the church’s presence as a gateway to the city. The church argued that other churches have steeples above the maximum 70 feet.

Most of the discussion at the city’s Planning Commission meeting last night (Tuesday) focused on concerns that the church would have problems updating one of its ramps to make it ADA-compliant.

“On W. Columbia, both curb ramps at the midblock crosswalk need to be replaced,” according to the staff report.

“Since there are offsite parking agreements, all infrastructure that is being utilized in the right of way is required to be brought into current ADA standards.”

Facing the possibility of the proposal getting deferred because of the ramp, the team behind the church’s expansion said that they will figure out a way to meet the requirements for ADA-accessible ramps.

The Planning Commission approved the site plans and variance recommended.

The Board of Zoning Appeals will take up the church plans — decide if the church’s claims for the higher steeple will be allowed — at their meeting on Thursday, Oct. 17.