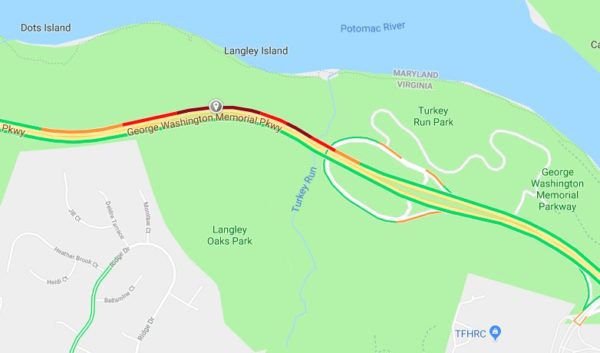 Construction crews are working to fix the cause of a sizable sinkhole that opened up on the GW Parkway back in March — inconveniencing those who regularly travel on the road.

The sinkhole was caused by a failed drainage structure, Aaron LaRocca, a spokesperson of the National Park Service, which maintains the GW Parkway, said.

The structure was made of brick and was originally built more than 60 years ago, he added.

In an attempt to fix the issue, LaRocca said NPS removed the old system which required them to dig 50-feet underground and crews are now in the process of installing a new drainage pipe.

“We know this construction is inconvenient, and we’re working hard to reopen the lane to traffic as soon as it’s safe,” LaRocca said. “We’re looking forward to sharing an update when the work is complete.”

NPS expects to reopen both lanes of traffic by mid-October, LaRocca said, but restoration for the area is expected to last longer.

National Park Service tells @ABC7News both northbound lanes of the GW Parkway near 495 should finally be open by the end of October.
Only one lane has been open since a sinkhole opened up back in March.
It’s causing bad traffic throughout the day. pic.twitter.com/FnoXOqJYYX