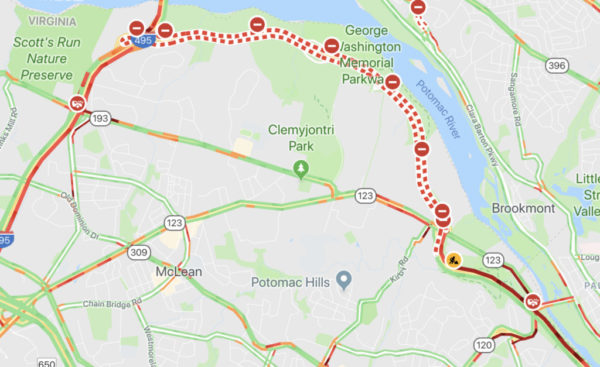 Update on 3/24/19 — The sinkhole has been filled and all lanes of the Parkway have reopened, according to the National Park Service.

Sinkhole filled! Road repaved. And the George Washington Memorial Parkway will reopen in all directions about 2 pm. Huge thanks to @USDOTFHWA @VaDOT and @VSPPIO for all the help! https://t.co/CNjDfOEKCc pic.twitter.com/uVpWOAV65X

Earlier: The northbound lanes of the GW Parkway are closed due to a large sinkhole that was discovered overnight.

Heavy rain Thursday may have contributed to the sinkhole’s formation.

It’s reportedly located near the Dead Run Trail, closer to the Parkway’s junction with the Beltway. The road was completely closed between Route 123 and the Beltway for much of the morning. The southbound lanes were reopened Friday afternoon.

Northbound traffic is being diverted onto Route 123, which in turn had morning rush hour traffic backed up at least a mile and a half past Chain Bridge.

No word yet on when the sinkhole might be repaired, though the northbound lanes are expected to remain closed through the weekend. Crews are currently evaluating the extent of the damage, said to be caused by a broken storm water pipe.

Northbound George Washington Memorial Parkway will remain closed through the weekend as road crews and engineers work to fully assess the extent of the sinkhole and repair the road.

Throughout the day, crews have been working to excavate around a damaged stormwater drainage pipe to determine the best way to safely and effectively fill the void and quickly reopen the road.

Preliminary findings indicate that the sinkhole is about 10 feet deep, 12 feet wide and 30 feet long. Once crews complete the extensive excavation work needed to fully access the damaged area, experts will better be able to determine how long it will take to fully repair the pipe and rebuild this section of road before reopening the northbound Parkway to travel.

As a critical link in the region’s transportation network, closing the George Washington Memorial Park is never a decision that is made lightly. The National Park Service is cautiously hopeful that some travel may be permitted by Monday, but drivers should follow local news or visit www.nps.gov/GWMP for the latest information.

Just before 6 a.m. Friday, March 22 a car traveling northbound in the right lane hit the sinkhole adjacent to the road. The driver lost control of their vehicle hitting a stone wall before coming to rest just off the side of the Parkway. When first responders arrived on scene they determined there was an active sinkhole under the road and initiated a closure of the northbound Parkway.

The driver was evaluated by paramedics on scene but declined any further care.

An initial assessment of the road found a large sinkhole deep under the surface of the roadway that extended for an unknown distance. Out of an abundance of caution, National Park Service maintenance crews in consultation with public safety personnel and experts from the Federal Highway Administration, made the hard decision to also close the southbound lanes.

Further assessment revealed damage to a large concrete stormwater drainage pipe that runs deep below the Parkway. Experts from the Federal Highway Administration worked quickly to better assess the potential risk to the southbound lanes, and ultimately determined is did not post an immediate threat. At approximately 11 a.m. the NPS reopened the southbound lanes for travel.

Sinkholes are common occurrences in the Greater Washington area, and are often preceded by high volumes of rain like the region saw on March 21.

More information will be released when it is available.

Our road crew is on scene with @ffxfirerescue and we are calling additional experts to evaluate extent of damage. Extended closure likely. #VaTraffic https://t.co/0uGomupBbQ

Sinkhole below GW Parkway appears to be caused by a broken storm water pipe deep below ground. This is unrelated to the road surface or condition of the GW Parkway. Once we know how long the void is & associated risk we’ll determine extent of continued road closure. #VATraffic pic.twitter.com/mvwQhHsfh8

Both lanes of the GW Parkway are still shut down, as they were when there was a traffic nightmare during the morning rush hour.
This is the scene of a sinkhole in-between the Beltway & 123 that caused all this. pic.twitter.com/FdlIm3C0OP

Getting up close look at the damage on the GW parkway now – half the road is completely gone @nbcwashington pic.twitter.com/sTUZZjTlsz