The Fairfax County Police Department is set to receive 1,210 body-worn cameras that would be phased in over three years with a five-year contract for equipment, licensing and storage.

Before the vote, Springfield District Supervisor Pat Herrity shared concerns about the fiscal impact of the proposal, including that the funding approval is happening outside of the budget cycle, Chairman Sharon Bulova said it’s necessary to have the funding before the budget decisions in May.

The $4.3 million approved by the board today comes from the Reserve for Ad-Hoc Police Practices Review Commission.

“This amount will cover the initial cost of equipment, infrastructure enhancements and will allow for the immediate recruitment and hiring of personnel to ensure a seamless implementation on or about May 1,” according to county documents.

Herrity also said that he has concerns about the funding coming from the reserve — a one-time fund — and that body worn cameras are getting prioritized over increases in police officers’ pay.

“This is going to set our public safety budget back by millions of dollars,” Herrity said, adding that he wants information on extra costs for the Public Defenders’ Office. 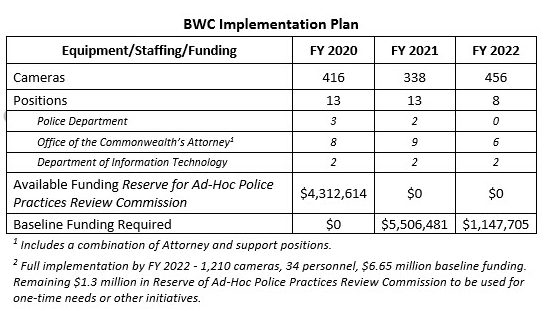 “The overwhelming support in the community for doing this is important. We know our community pretty well and we know the respect the community has for the Fairfax County Police Department,” Foust said. “We have the tech to do it, and we should move forward.”

After the vote, Braddock District Supervisor John Cook requested that the county executive work with the Public Defenders’ Office to determine an increase in the office’s budget that the board can consider in May.

Cook said that the body worn cameras will generate “significant legal work needed to review [the footage],” noting that most of the defense attorneys are from the Public Defenders’ Office.

The full implementation of the body worn cameras is expected to take three years. The cameras would come to the McLean District during the second year of the program.

“This is about transparency. This is about the community feeling confident in our police department,” Lee District Supervisor Jeff McKay. “We know that they do.”