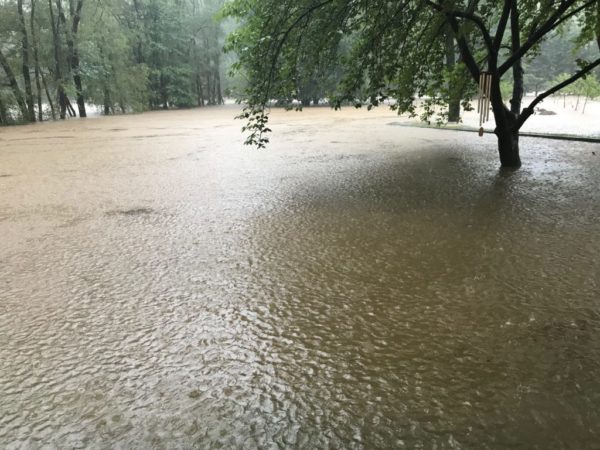 If you spot chickens in McLean, they may be the three ones reported missing from a backyard coop that was washed away in flash floods on Monday.

Cat McGill told Tysons Reporter that her family and a neighboring family on Great Falls Street by Pimmit Run Stream started a joint venture to keep chickens on their combined 3.5 acres of land.

“We got them because the kids didn’t have any pets,” McGill said, adding that her 1.5-year-old son and the neighbors’ kids, ages 13 and 7, shared them. “My son literally has to see — he calls them cluck clucks — the cluck clucks every single day.”

The kids named the Buff Orpington chickens, which they had for about two years, Peridot, Peril and Gerboa, she said. (Previous chickens they had were named Beyonce and Katy Perry.)

The kids don’t know yet that their pet chickens are missing — McGill is with her son in Ohio at the moment and the neighbors’ kids are on vacation. “They are just going to be heartbroken,” she said.

When the flooding happened, the chickens were in a large coop outside that doesn’t have a bottom. She said a neighbor found a part of the structure by the McLean Little League fields.

At first, McGill thought that the chickens were washed away, but then someone posted a photo on Nextdoor of chicken “paw prints” by where the coop crashed, giving her renewed hope that they might still be alive.

McGill said it’s been heartening to see so many people searching for the chickens — “There are some very sweet neighbors.”

In addition to the missing chickens, McGill said that about 4 feet of water flooded the 3.5 acres destroying their bridge and a shed and floated the kids’ playset away.

“The chickens are the only thing we’re upset about,” she said about the damage.

If you see any chickens, email [email protected] and we’ll make sure McGill gets the information.