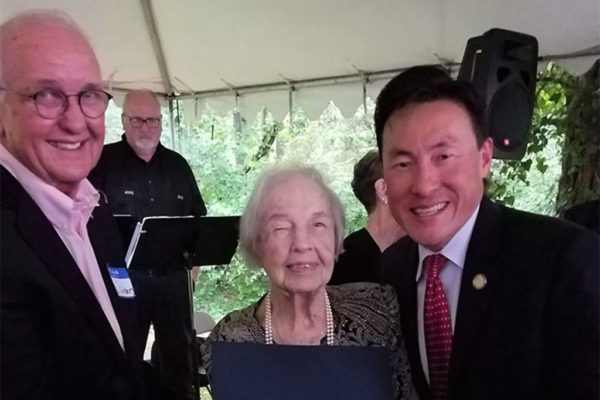 Years ago, there was a stinkbug invasion at a farm in Vienna. They were a source of concern for everyone on the farm except Clarene Vickery, who turned catching and collecting the bugs into a game for her children.

Ray Vickery Jr. remembered his mother, who died last Wednesday (June 26) at the age of 101, as a woman who could turn challenges into fun opportunities.

“She was a real life force,” Ray said. “She was able to meet and overcome problems.”

Clarene founded the Parkwood School in Vienna in 1956 and — over her 64 years as director and owner — helped teach more than 10,000 students. Ray said his mother founded the school at a time when there was no public kindergarten in Virginia and education for young children wasn’t seen as a priority.

“She started Parkwood in our living room,” he said. “She was still running the school months before her passing.”

Ray said his mother loved working with children and was able to communicate with them on a personal level.

In addition to her time running Parkwood School, Clarene was a founder of the Virginia Association of Early Childhood Education and a founding member of Providence Baptist Church in Tysons. In recent years, Clarene received recognition from a variety of public officials and a formal resolution commending her life work from the Virginia General Assembly, where her son Ray was once a member.

“She taught us it’s really important to value people for themselves, not for status or money,” said Ray.

When she wasn’t teaching, Ray said his mother liked to drive. She would take long solo trips back to Mississippi, where she was born. When she was too old to drive safely, Ray said she would take the car to the church parking lot and drive around “just to keep her hand on the wheel.”

A service will be held at Vienna Baptist Church (541 Marshall Road SW) at noon today (Tuesday). Clarene will be buried in Arlington National Cemetery with her husband.

“She appreciated that there was still a small town atmosphere [in Vienna],” Ray said. “She wanted to maintain that person to person connection.”

END_OF_DOCUMENT_TOKEN_TO_BE_REPLACED

More Stories
Police: Three Stores Burglarized in McLean Over the WeekendClosures Around Tysons for the Fourth of July