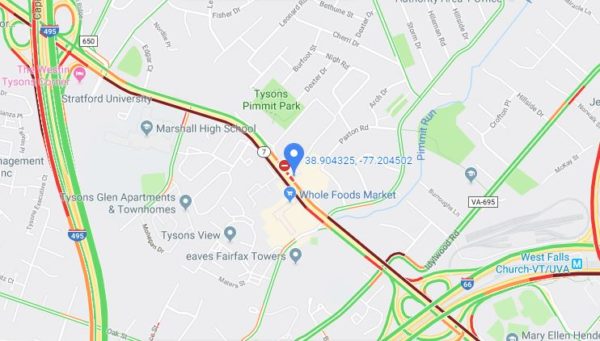 The Fairfax County Police Department took to Twitter shortly after 3 p.m. to advise people to avoid the area.

Drivers can expect delays until 5 p.m. today, according to the Virginia Department of Transportation. Route 28A route for Metrobus, which runs along Leesburg Pike, is currently experiencing delays as well.

Currently, traffic is slow-moving along Leesburg Pike from I-495 to just past I-66.

View from Route 66 of traffic backed up on Route 7 pic.twitter.com/GYPVzq0SfZ

Leesburg Pike getting chopped up 🚧 😱👋 pic.twitter.com/pGigHEcKRg

AVOID: Water main break on Leesburg Pike at Patterson rd a mile from 66 in Falls Church. Crews are just starting to dig to try to locate the break. Gushing water has severely damage roadway. All lanes on RT 7 closed. Traffic is trickling by in service lane on each side. @ABC7GMW pic.twitter.com/P1rL8VzmyP

END_OF_DOCUMENT_TOKEN_TO_BE_REPLACED

More Stories
Falls Church Police Looking for Suspects in Armed Robbery at West End PlazaPoll: What Are You Most Excited for This Summer?