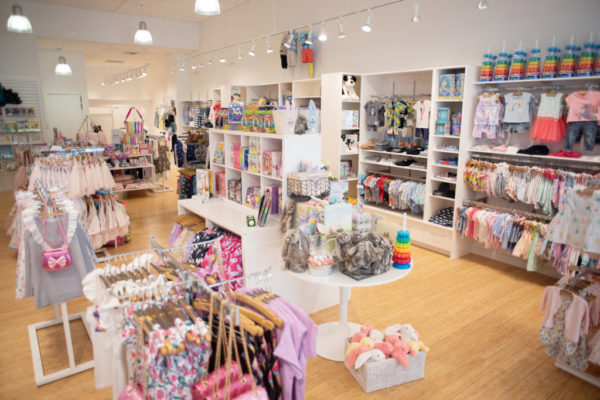 Rewinding to when it all began, owner Bridget Quinn Stickline told Tysons Reporter that she started Wee Chic after struggling to find clothing she liked for her daughter, who was then a baby. “A retailer alert went off [in my head] — this is a void in the market. There’s opportunity here,” she said.

Stickline, who has worked in the garment industry and is a self-described “fabric-phile,” knew she wanted ethical fashion with a modern approach that she could buy in boutiques.

Fast forward to present day and Wee Chic sells appropriate kids’ clothing that parents can have a hard time finding, she said.

Originally based in the Baltimore-area, Wee Chic has a newly opened Mosaic District shop, which was formerly the location of Dawn Price Baby — another local kids’ boutique that started shuttering its stores last year after 15 years in business.

Stickline said that she heard about Price’s plan to retires and signed the lease for the space in March just a few months after Price’s lease ended.

“We saw that as a sign for us to make a move into Northern Virginia,” Stickline said, adding that she likes the variety of restaurants and mix of national chains and small businesses that call the Mosaic District home.

She says she hasn’t had any customers confuse the two shops, since the decor and merchandising “feel very different” from Dawn Price Baby.

Wee Chic embraces the individuality, fun and the flexibility that comes from being a small business, Stickline said.

She has embraced recent push in the industry toward selling gender-bending — not be confused with gender neutral — clothes and toys. “We’re seeing dinosaurs on girls’ clothing. Why didn’t this happen 10 years ago?” Stickline said, adding that she’s excited about how retailers are starting to think differently about gender.

Wee Chic is also unique in its refusal to sell products online — a move that might be surprising in an e-commerce age, but one that Stickline says creates in-person experiences that shoppers can’t replicate online. “For us, it’s about the human connection,” Stickline said. “We get to know clients really well.”

Even in “Age of Amazon” as Stickline calls it, the boutique sees returning customers — “the Wee Chic Squad” — that allows Stickline to watch kids grow up.

“Kids come into our store and it’s their favorite store,” she said, adding that parents will bring their kids shopping there as a reward. “That’s a really cool feeling to create a space that kids love.”

Now age 12, Stickline’s daughter has outgrown Wee Chic, but has picked up her mom’s entrepreneurial spirit, Stickline said. “She was the original Wee Chic.”