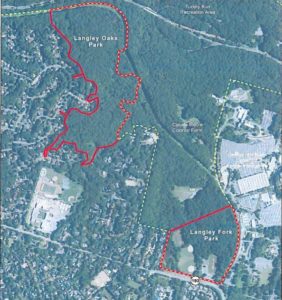 Update on 4/2/19 — Fairfax County Park Authority officials noted that the earlier development plans were out of date, and the current development area is much smaller than initially reported and only includes redeveloping one field into two lighted synthetic turf fields with additional parking.

After eight years of planning, Langley Fork Park is in the final stages of changing hands, clearing the way for two new fields.

Jenny Anzelmo-Sarles, a spokeswoman for the National Park Service (NPS), said the NPS is working through the final stages of a land-swap with Fairfax County. The NPS currently owns Langley Fork Park, which is a developed recreational property, while Fairfax County owns Langley Oaks — a more heavily wooded, natural parkland west of the Claude Moore farm area.

If the deal goes through, Anzelmo-Sarles said the property could change hands within the year.

“We are trying to increase facilities there, and we agreed to a land exchange,” David Bowden, director of the Park Planning and Development Division, said. “We have another piece of undeveloped property at Langley Oak. Our goal is to exchange Langley Oaks for ownership of Langley Fork Park.”

The Park Authority has managed Langley Fork Park since 1981, adding athletic fields, a fitness trail and more to the site since then, but the park remained on loan from the NPS.

The new development plans involve redeveloping one field on the site into two lighted synthetic turf fields with additional parking.

As a side-note for history buffs: archaeological surveys of the property showed the first known use of the site was as a prehistoric quartz quarry, and a hearth was found that dated back to 300 B.C. An environmental assessment from the National Park Service noted that synthetic turf will not be used to improve the existing fields in the north and western portions of the site for archeological reasons.

Langley Oaks Park, meanwhile, is 102 acres of undeveloped land contiguous to the NPS’ Turkey Run Park along the Potomac. The NPS said it has no plans for any changes to the property.

The NPS is also currently in the very early stages of developing a plan for the Claude Moore Farm property east of Langley Oaks, which could include new trails connecting the two properties.