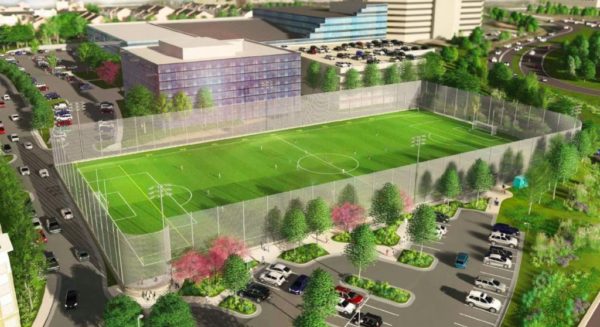 The long-awaited Tysons Technology Park near Leesburg Pike is about a month away from opening.

The athletic field just south of the intersection of Leesburg Pike and the Beltway will replace a surface parking lot with a five-level parking garage and a full-sized athletic field. The athletic field includes amenities like LED lighting, bleachers and bicycle racks.

The project was built as part of a proffer — an accommodation from a developer to qualify for zoning exemptions — from the Meridian Group for the nearby Boro project. Once opened, the field will be operated and maintained by the Fairfax County Park Authority.

Mike Killelea, a communications manager with construction contractor L.F. Jennings, said the project is a few weeks from completion.

“We should be turning it over to the Park Authority by the middle of May,” said Killelea “We should be done with construction by May 1.”

Killelea said after the handover to the Park Authority, the project will likely have to go through some paperwork and review before the it opens. Staff at the Park Authority said that until the park is handed over, it would be difficult to determine exactly how long that process will take, but that ribbon-cutting for the park is still tentatively planned for mid-late May.