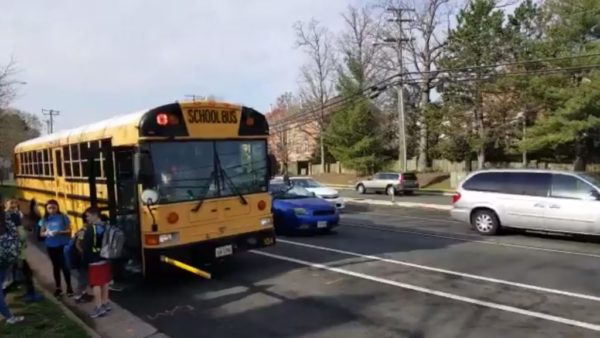 (Updated 1 a.m.) Video from Freedom Hill Elementary in Vienna showed at least six cars driving past a school bus loading up with children.

As a reminder for those who might not have been paying attention during their driver’s ed class: if a school bus is loading or unloading passengers, whether or not the lights are active or the stop sign is extended, drivers are required to stop unless the bus is on the opposite side of a median or barrier.

Drivers are also required to remain stopped until all passengers have been loaded and the bus moves again. Failure to do so could result in a ticket.

1/5 It saddens me to share this- after watching cars consistently blow past stopped school buses picking up elementary students on Gallows Rd in Vienna, VA- I have been pushed into civic action. This clip is from this morning, but is representative. pic.twitter.com/5I0ZLBufB0

During VDOT’s initial proposal for I-66 corridor improvements, the Federal Highway Administration noted that concerns were expressed about pedestrian safety on Gallows Road.

The person who posted the original video said that the clip was representative of pick-up and drop-off at the school.

But the story has a happy ending, at least, with Fairfax police arriving the next morning to monitor traffic and enforce the laws.

I must give props where it is due. Mclean PD officers came out this morning to hold drivers accountable. Thank you @FairfaxCountyPD! This is what responsive local gov looks like. cc: @GerryConnolly @ChapPetersen @TownofViennaVA @FreedomHillES @TysonsReporter