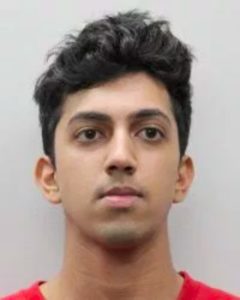 Fairfax County Police say investigating a trail of broken eggs and gunshots yesterday (Thursday) led to a combative encounter on the 2000 block of George Washington Road.

Officers responded to a report from a homeowner whose entertainment center was damaged when a bullet came in through the window, according to a police report.

While investigating the gunshot, an unusual set of circumstances led police to a combative suspect.

As officers were checking the area, they saw broken eggs on the outside wall of a nearby home. Officers spoke with a man inside that home, Varun Srivastav, 21, of Fairfax. Officers learned there was a handgun inside in Srivastav’s home.  This agitated Srivastav who became combative and hit two officers. Srivastav was arrested but continued to assault officers while being escorted to the cruiser. Once he arrived at the Adult Detention Center, Srivastav assaulted two deputies.