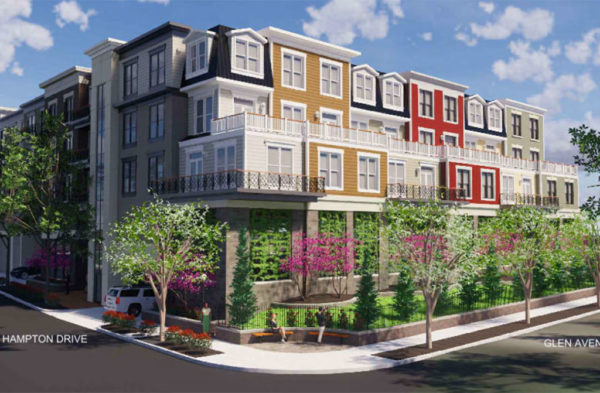 The Vienna Town Council will review two projects along Maple Avenue in a work session tonight (Monday), after indicating concerns that developers are trying to skirt zoning regulations by pushing their proposed heights a bit higher than current limits might allow.

The 380 Maple development is a proposed mixed-use building with 7,500 square feet of ground floor retail and 40 residential condominiums on three floors. The building includes one floor of underground parking and two floors of structure above-ground parking, but staff noted that the applications calls for an extra half-floor added to the mix, beyond current limits in the area.

“Staff notes that the applicant is proposing a half-floor of parking between the first story and second story of the building, beyond the four stories allowed per code,” staff said in a project overview. “The applicant is applying for a modification of requirement for the additional half-story.”

While approving of greater levels of parking available at the site, Councilmember Douglas Noble said at a meeting last week that he was concerned the additional half-story would still be contrary to the Maple Avenue zoning code’s five-story limit.

“Staff notes that the applicant is proposing a half-story space to include additional lobby and common spaces for the assisted living facility between the first story and second story of the building, beyond the four stories allowed per Code,” staff said in the project overview. “The applicant is applying for a modification of requirement for the additional half-story.”

An additional item listed as “limiting discussion with developers” was also added to the agenda at the request of Councilmembers Pasha Majdi and Howard Springsteen, two of the leading opponents to the controversial Maple Avenue Commercial developments last year.

Image via Town of Vienna Planning and Zoning