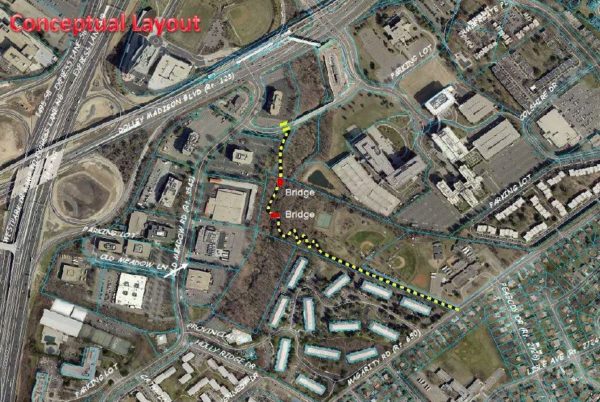 A new project is underway to make Tysons East a little more walkable.

The Scott’s Run Trail will provide a half-mile trail connecting Westgate Elementary School to the McLean Metro Station. The planned trail runs through the heart of Tysons East.

The path is planned to have an eight-foot-wide pedestrian walkway and two pedestrian bridges over the stream. The project’s aim is to facilitate pedestrian access to the McLean Metro for residents in the southern section of Tysons East, like the Pimmit Hills neighborhood.

Plans for the project date back to the Tysons Metrorail Station Access Management Study in 2011, and it was approved by the Board of Supervisors as part of a transportation priorities plan in 2014. The project recently opened for construction bids, which will be collected until March 5 and opened publicly that same day.

The total estimated cost of the project is $3.3 million funded by the Federal Regional Surface Transportation Program (RSTP).

Another trail pedestrian-bicycle trail is planned nearby to connect Tysons East with Tysons Corner Center.