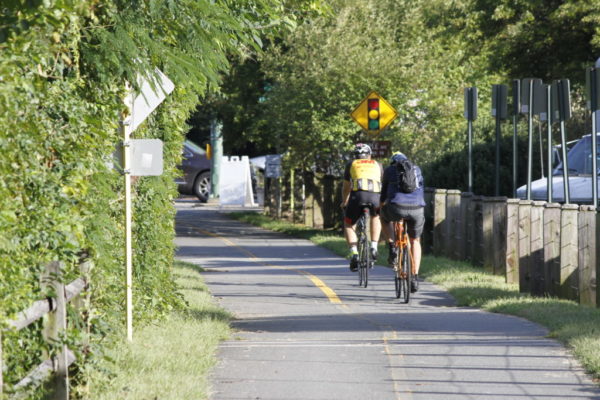 Currently, e-bikes are not allowed on Fairfax trails, but that could be changing soon.

NOVA Parks regulations currently group motor-assisted bicycles in with motor vehicles, and they are only permitted where motor vehicles are allowed. The regulation was originally intended to regulate the use of mopeds and does not fully address e-bikes.

As a result, NOVA Parks is recommending a change in Fairfax County’s regulation to allow legal use of e-bikes where other pedal-powered bicycles are permitted.

Electric power-assisted bicycles (e-bikes) equipped with pedals that allow propulsion by human power are considered bicycles and non-motorized vehicles for the purpose of these regulations, and are allowed in the same places that traditional, pedal-powered only bicycles are allowed.

Under federal law, e-bikes are broken up into distinct classes, but in Virginia, e-bikes are regulated by power with a maximum allowed speed of 25 miles per hour. In Fairfax, the new regulations would limit e-bikes to those with 750 watts of power or less and limit speed to under 20 miles per hour. E-bikes would be allowed anywhere pedal bikes are.

Like pedal bikes, guidelines say e-bikers should yield to pedestrians and equestrians.

Allowing e-bikes in Fairfax can be a contentious topic, with safety concerns about the size and speed of the vehicles. Large vehicles fitting under the nebulous “e-bike” categorization have been spotted speeding along the trail.

But Alexis Glenn, a board member of the Fairfax Alliance for Better Bicycling (FABB) and an e-bike rider, said it’s practically impossible for most bikes to go more than 10 or 15 mph and are often passed by other pedal-powered bikes on the trail.

“Safety on trails will always, always be an education and culture issue, not an equipment issue,” said Glenn. “The weight of e-bikes actually makes it take longer for a rider to get them up to or maintain high speeds. And, if an e-bike user is somehow able to buzz down a trail at 20 mph without encountering a curve, bump, or other users to slow her down, then the battery will drain fast, rendering the e-bike to just a bike.

“My inclinations aside, yes, speeds are a valid concern and NOVA Parks are working on regulations regarding this,” Glenn continued. “I’ll say it again, speed is a user education issue, not an equipment issue. When a driver speeds recklessly we don’t cite the make and model of his vehicle as the culprit, it’s his bad behavior.”

Glenn said FABB supports the proposed policy change as part of promoting greater use of bicycles for recreation and transportation.

Judy Pedersen, public information officer for Fairfax County Park Authority, said the Park Boards are likely to make a decision on the regulation in the spring.

But in the meantime, Pedersen asked e-bikers to obey current park rules and keep off the trails.

“Until the new regulation is approved by both Boards riding e-bikes on trails would be a violation of park regulations,” said Pedersen. “Current park regulations define any vehicle with a motor (gas or electric) as a motor vehicle, therefore excluding their use on park trails.”