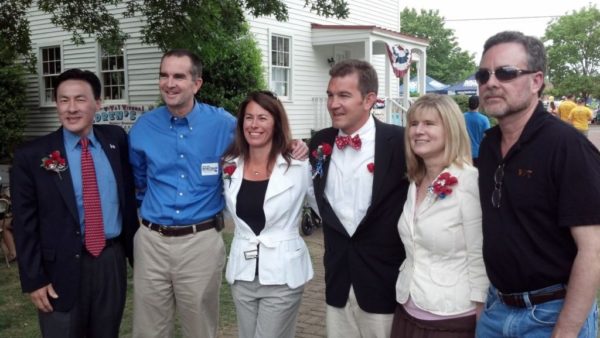 By all accounts, Gov. Ralph Northam (D) was speaking to a friendly crowd in Tysons at the Northern Virginia Chamber of Commerce last Thursday.

But within 24 hours, Northam would find himself at the center of national headlines in a scandal involving a racist photograph  on his medical school yearbook page, prompting calls to resign from many politicians, including Tysons-area representatives.

State Sen. Barbara Favola (D-31st District) described herself as a personal friend of Northam’s, but expressed support for the Virginia Black Legislative Caucus’ statement that Northam should step down.

(1 of 2) Gov. & First Lady Northam are personal friends. I know my friend and his good record of public service to VA. I also know VA history and that the picture in question is offensive and hurtful. https://t.co/sBO3oCwCzu

Back in Richmond to continue the people’s work in the Virginia legislature.

Here’s my latest but consistent position on the Governor:

State Sen. Janet Howell (D-32nd District) said on her Facebook page that she does not believe Northam is racist, but that if he is one of the people in the now-infamous photograph he would need to resign. Northam himself has wavered back and forth over whether he does or doesn’t appear in the photograph.

The Governor needs to resign. We’ve spoken twice since this story broke, and I encouraged him to resign because it's what's best for Virginia.

This is a difficult time for our Commonwealth, but I know we can move forward & start healing under the leadership of @LGJustinFairfax.

One of the few silent voices on the issue has been State Sen. Chap Petersen (D-34th District).

Petersen has not shared any statements on Northam, though many on his Facebook page speculated his quoting of the Bible verse about those without sin casting the first stone was a thinly veiled reference. In an interview with WDVM, Petersen said he was baffled by the situation.