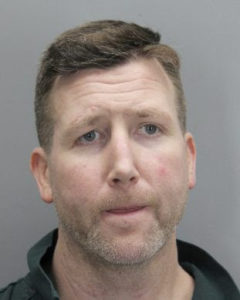 A man in the Tysons East area was arrested and charged with felony animal cruelty and other charges after police found evidence they believe indicates he killed his dog.

“The 41 year-old McLean man is facing four charges related to the death of his dog,” Fairfax County Police (FCPD) said in a press release. “Robert Hutchins was charged after officers were called to the 1600 block of Spring Gate Drive on Tuesday morning when residents reported a trail of blood leading to his apartment door.”

While performing a welfare check, FCPD said Hutchins was located with his deceased dog inside the apartment.

“Detectives and Animal Protection Officers were called to the scene to assist in the investigation,” the crime report continues. “Evidence was recovered implicating Hutchins’ involvement in the dog’s death.”

FCPD said the man was arrested the same day and charged with felony animal cruelty, possession of a firearm by a convicted felon, possession of ammunition by a felon and firearm use in the commission of a felony. He is currently being held at the Fairfax County Adult Detention Center without bond.

Police are asking that anyone who may have more information about the incident to contact Animal Protection Police Officer Enna Lugo at [email protected] or 703-324-0222.