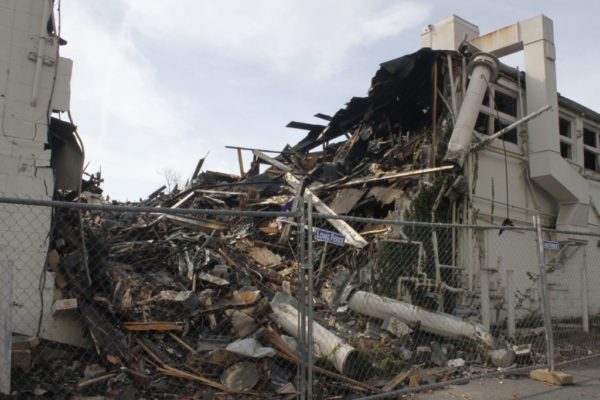 Months after a large fire leveled the restaurant, Marco Polo still stands as a burnt out husk on Maple Avenue.

The building had been long vacant and was set to be demolished, even before two teens allegedly set fire to the building as part of a small crime spree.

The site is owned by a limited-liability corporation, Vienna Vision LLC, and was planned to be redeveloped as 8,200 square feet of retail space and 44 townhouse condominiums. The development was approved in 2017.

Town of Vienna staff say a letter has been sent out to representatives of the property’s owners with questions regarding the property and condition, urging them to do something about the building’s “blighted condition.”

After Vienna staff sent a letter requiring action within 30 days, Doug D’Alexander, the property’s developer, applied for a demolition permit on Dec. 16. Additional information about the demolition was requested and no response has been offered by D’Alexander.

Tysons Reporter attempted to contact D’Alexander but has not received any response.

“As part of the development process, the site plan was approved in early December,” said Lynne Coan, communications and marketing manager for the Town of Vienna. “Next steps as part of the [Maple Avenue Commercial] process would be for the project to go before the Board of Architectural Review and for the developer to apply for building permits.”

If no progress is made, the town government could move forward with blight proceedings, where the town would demolish the building and charge the expenses to the property owner.