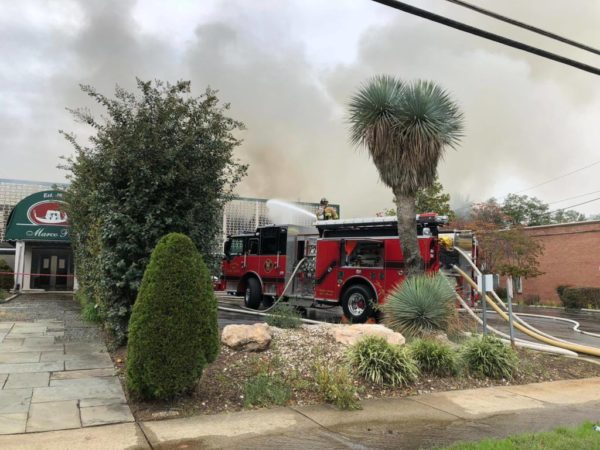 The former Marco Polo restaurant in Vienna went up in flames Sunday afternoon.

A fire broke out in the vacant building at 245 Maple Avenue W. shortly before 2 p.m. A second alarm was sounded as firefighters worked for around an hour to get the blaze under control.

Firefighters from around Fairfax County and as far away as Arlington battled the flames. The Vienna Volunteer Fire Department also assisted at the scene.

It’s unclear what caused the fire as the building was reportedly vacant. No injuries were reported.

The building has been discussed as a possible site for redevelopment, though thus far no solid plans have been revealed.

Fire at the old Marco Polo restaurant in Vienna today. Seemed like every engine co. Was there. I heard two loud bangs about 30 seconds apart shortly before the sirens started. Wonder what happened cuz it certainly doesn’t seem to be a controlled and planned burn… pic.twitter.com/OnMpvlubL4

Earlier today, Fairfax County Fire and Rescue Department career staff from Engine 402 and Medic 402, along with…

UPDATE 200 block Maple Avenue West: The fire is under control. The structure was vacant at the time of the fire. pic.twitter.com/9J0PMOcdg7