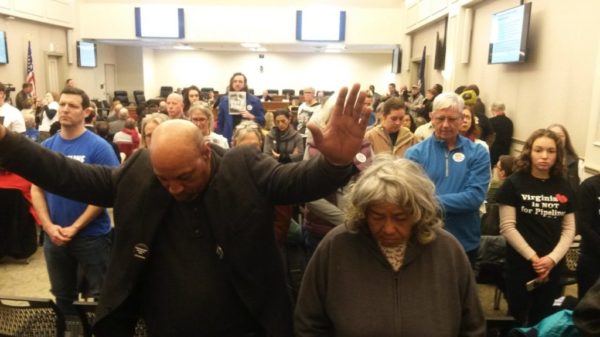 Union Hill isn’t anywhere close to Tysons, but state Del. Mark Keam (D-35) is taking an active role in a fight against a controversial gas compressor station proposed to be built in Buckingham County neighborhood.

Yesterday (Wednesday) the State Air Pollution Control Board delayed a decision on whether or not to approve a piece of Dominion Energy’s $7 billion Atlantic Coast natural-gas pipeline.

The board voted 3 to 1 in favor of a delay in approval, but a new vote was not scheduled.

Staff from Virginia’s Department of Environmental Quality said at the meeting that the area around the compressor was sparsely populated and did not have historic resources of significance.

But local community members have repeatedly protested contested staff’s findings. Keam says he’s in the nearby residents’ corner and told Tysons Reporter there’s reason for concern in his home district.

Keam – "I also cannot sit idly by while a neighborhood of low-income, elderly African Americans in Union Hill is about to be destroyed by a compressor station constructed near the sacred grounds where freed slaves are buried in unmarked graves."

“[Dominion] has used misleading data that covers a broader range,” said Keam, referring to a census cited in DEQ reports. “But if you go neighborhood to neighborhood, it shows that these [residences] are very close and more condensed. I went around there and I can tell you that there are houses within eyesight of this location.”

Keam’s assessment goes against the findings of DEQ staff, which reiterated at yesterday’s meeting that a failed attempt to have Union Hill recognized by the Department of Historic Resources further cemented staff’s findings that the area surrounding the proposed compressor station does not qualify for historic protections.

While DEQ staff said the broader census data shows no greater concentration of minorities than the rest of the state, local residents characterized Union Hill as a historic African-American neighborhood settled by freedmen and emancipated slaves following the Civil War.

Keam said staff’s findings are the result of understaffing and over-reliance on information provided by Dominion:

I’ve had deep concerns about this from the get-go. DEQ only has a few people that work on these things. Like most government agencies, they are overworked and understaffed… The fact that they have to rely on applicant, I understand that’s the process, but something like this that’s so controversial… it would really beg the question why DEQ isn’t spending more time looking into these issues. I’m hoping this will give everyone a chance to come to consensus. But it tells you, if they’re willing to overlook this, what else are they overlooking.

Keam acknowledged that he would still have been opposed to the compressor station even if it weren’t at Union Hill, pointing to concerns that the federal law authorizing the pipeline allowed Dominion Energy to cite its own affiliates as the customers when making a case for the pipeline’s economic necessity.

At the Atlantic Coast Pipeline website, Dominion Energy says the new pipeline will save consumers an estimated $377 million in energy costs, but Keam said existing underground pipelines are only being used at 50 percent capacity, so Keam said a new line won’t necessarily mean Northern Virginia will see a decrease in energy costs, but that Dominion Energy will push the costs to build the pipeline onto the consumer.

“Our power lines are fine,” said Keam. “It’s not going to have any impact on getting more or less power. But if Dominion is spending, eventually someone will have to pay for it, and that’s ratepayers like you and I. Whatever cost, they get to spread to its ratepayers.”

Finally, Keam argues that the placement of the various compressor stations, like one on Native American land in North Carolina, further shows the oppressive mechanisms at work behind the pipeline.

“You’re not going to see [this compressor station] in McLean or Tysons,” Keam said. “This is land they bought for pennies on the dollar where [the residents] are the descendants of slaves. It’s racial injustice.”